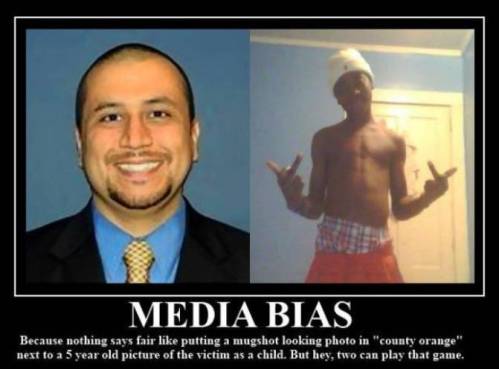 Conservative commentator and author Michelle Malkin – a darker, shorter, but much more attractive version of Ann Coulter – apparently posted the item above to “Twitchy,” her Twitter-based project with the following caption:

“Recognize these two people?  If you don’t we’ll help you out.  The man on the left is George Zimmerman, the man accused of murdering the boy on the right, Trayvon Martin.  The mainstream media won’t show you these two photos because they convey a message that no one else wants to take into consideration.”

There is one glaring error: the “boy on the right” is not Trayvon Martin.  Who he is, I don’t know and I’m not certain if Malkin herself composed the poster.  Twitchy has since retracted their “mistake,” an honorable admission in a business that doesn’t like to let truth get in the way of hyperbole.  This is not the first time Malkin has made outrageous statements.

Like any good right-wing American, she supported Bill Clinton’s 1998 impeachment trial and thought the U.S. Supreme Court got it right in Bush v. Gore.  But, she criticized former Congressman Dennis Kucinich for wanting to impeach Vice-President Dick Cheney in 2007.  You know Dick Cheney – the man who used every excuse under the sun to avoid the military draft, then sent thousands of real heroes into a war based on lies.  But, like most conservatives, Malkin feels lying about a tryst with a two-bit overweight intern is worst than lying about a war.  Not surprisingly, Malkin waded into the Obama “birther” controversy; first advising conspiracy theorists to approach the issue with caution, but then saying they have a legitimate concern.

Malkin has had her moments of clarity.  In 2007, she criticized the New York Times for not covering the Medal of Honor ceremony for Lte. Michael P. Murphy, a Long Island native and Navy SEAL who had been killed in Afghanistan two years earlier.  Murphy was the first Navy SEAL since the Vietnam War to receive the honor and the first in the current War on Terror.  In 2008, she rightfully dubbed the Bush Administration as “illegal alien-enabling” and the banking industry as “crime-enabling.”  But then, she threw “ethnic lobbyists” into the same mix.  “Ethnic lobbyists?”  That could only mean Negroes and Mexicans who’ve historically been the subject of unfair housing and banking practices.

As a first generation Filipino – American, Malkin should know a thing or two about race relations in America.  Like Louisiana Governor Bobby Jindal and South Carolina Governor Nikki Haley, Malkin is a rare (token) Asian in the Caucasian-dominated Republican Party.  Christianized to look more Americanized and therefore, made more palatable to a base that acts as if bigotry is akin to Black slavery itself – it disappeared decades ago, and any inclination of its presence is just an overreaction from bitter, fragile souls.  I don’t know what Malkin’s personal experiences are with racism, but if she’s like many non-White people in this country, she’s either fortunate never to have endured much of it, or floats in some sort of bubble of denial.  I’ve met both types.

Regardless, the picture above is another example of the covert racism of the ultra-conservative crowd.  It intimates that crime always has a dark complexion.  I can’t say if Malkin is directly responsible for its presence on her web site.  But, it’s still a site she established, and ultimately, she bears some accountability.  I wouldn’t expect her to apologize; extremists – conservative or liberal – rarely admit they’re wrong.