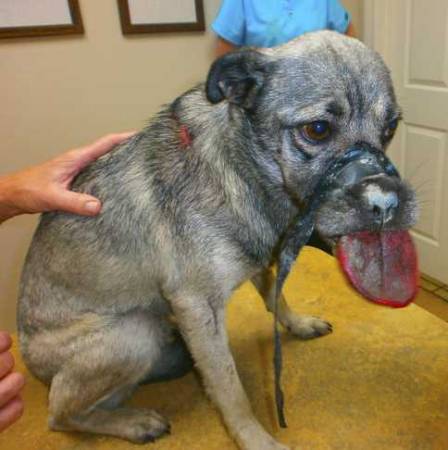 In yet extraordinary case of animal cruelty in the Dallas – Forth Worth area, a woman found a dog with its mouth taped and its tongue protruding severely from between its teeth.  Melanie Labrake spotted the animal, a young pug mix, along a rural road in Parker County, west of Fort Worth.  She stopped to try to help it, but the animal darted into a grassy field through a barbed wire fence.  She contacted local authorities who spent several hours searching for the dog.  They finally found it and turned it over to local animal control.

The dog, now named Hope, was taken to Bowie Drive Animal Hospital where she is undergoing treatment thanks to Dr. Kevin Buchanan.

Vets at the clinic said it took more than 100 internal and external stitches to close five open wounds that were one- to five-inches in length, through the muscle tissue.  Doctors said that Hope’s mouth was taped shut for more than 24 hours and that she will likely lose a portion of her tongue.

Originally unable to eat or drink, Hope underwent surgery and was given pain killers an IV and antibiotics.  Fears that she may not be able to eat or drink on her own have subsided as doctors at the animal hospital said Wednesday morning that Hope has been eating and appears to be getting better.

Several local businesses have established a reward fund for information leading to the suspect or suspects in Hope’s abuse.  In total, the fund now stands at $35,000.

4 responses to “Dog Found With Mouth Taped Shut, Tongue Out”