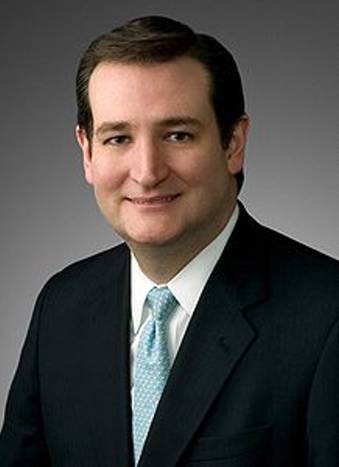 Okay, I know the title of this essay is a bad play on the name of Ted Cruz, the former Solicitor General of Texas, who hopes to replace Kay Bailey-Hutchison in the U.S. Senate this year.  He’s a Republican, of course, and since I’m not too fond of Republican politicians – especially the species creeping out of Texas – I have to criticize him.  Cruz isn’t just a Republican; he’s a “Tea Party” Republican – that wacky band of closet Nazis who emerged after our biracial president took office.  The “Tea Party” clan has grabbed the GOP by the throat and wants to send America back to the good old days of the 19th century, when only White heterosexual Christian males had power.

Cruz has been playing right into the gnarly hands of the far right; placating them with a variety of outrageous claims and blatant lies.  For example, he thinks billionaire businessman George Soros and the United Nations are conspiring to eliminate golf in the U.S.  As if that would be a bad thing.  Cruz also apparently adheres to the growing reemergence of nullification; a 19th century philosophy that states can invalidate any federal laws they don’t like.  The Affordable Health Care Act has become their favorite target.  In his first campaign ad, Cruz states, in his role as Solicitor General, he made it easier for Texas to kill an “illegal alien.”  It’s a reference to a 2008 case, Medellin vs. Texas, in which the state argued that it shouldn’t have to comply with the Vienna Convention.  The Vienna Convention is a 1969 treaty requiring countries to inform foreign nationals who are arrested that they have the right to legal counsel from their home country.  As of 2010, 112 states had signed it, including North Korea, which even honored it when it captured 2 American journalists in 2009.

Cruz has an apparent disdain for illegal immigrants – which I do, as well, to some extent.  But, from a cultural standpoint, you have to understand where this could lead.  Cruz hopes to appeal to Texas’ growing Hispanic population – most of whom are of Mexican or Central American extraction.  Most of them – despite what you may hear on FOX News – are either native born residents or legal immigrants who don’t commit crimes.  Here’s where it gets really interesting and personal.  Cruz is only half-Hispanic; his father was born and raised in Cuba where he had fought against and been tortured under the brutal regime of Fulgencio Batista.  Batista had come to power in 1933 and ruled Cuba until Fidel Castro led a successful coup in 1959.  Batista was an anti-communist ideologue, which endeared him to the U.S.  But, he revoked many personal liberties, such as the right to strike.  His secret police force allegedly killed thousands of people on the island nation.  Under his command, only a handful of families owned most of the land and therefore, held the bulk of the wealth and power.  As in most Latin American nations at the time, a wide gap existed between the wealthy and the poor; kind of like how the U.S. is becoming now.  Cruz’s father fled to the U.S. in 1957, arriving in Austin, Texas with $100.  But, Cruz was born in Calgary, Canada, that bastion of socialist anxiety right-wing extremists generally hate so much.  The “Tea Party” crowd frequently compares the Affordable Health Care Act to Canada’s universal health care policies – e.g. socialism.

Back to the Hispanic thing.  While most Hispanics trend Democratic when voting, Cuban-Americans, in particular, lean Republican.  And, as a group, Cubans seem to despise other Hispanics, mainly Mexicans and Puerto Ricans.  I don’t know why, but I’ve seen it and felt in the overall Hispanic community in Dallas.  I think it’s because Cuba is such a devoutly communist country; one of the last remaining bastions of Marxist theology in the world and the only one in the Western Hemisphere.  Therefore, when its residents flee to the United States, they are truly running for their lives.  But, no such compassion lands upon the shoulders of refugees from war-torn nations elsewhere in Latin America.  To paraphrase comedian Paul Rodriguez, ‘when Mexicans come here illegally, they take them to jail; when Cubans come here illegally, they take them to Disney World.’

Like any good Republican extremist, Cruz despises Barack Obama; believing the President is collaborating with Soros and others to turn the U.S. into a “European socialist union.”  He wants to gut both Social Security and Medicaid, feeling they have already pushed the U.S. towards that dreaded socialist state.  It doesn’t seem to matter that those programs have prevented millions of elderly and / or disabled people from slipping into poverty.  Republican vice-presidential candidate Paul Ryan feels the same way.  Neither will probably get much of the Hispanic vote and will have a tough time sweet-talking senior citizens.

Cruz is facing Democrat Paul Sadler, an attorney and member of the Texas House of Representatives.  Surprisingly, the Dallas Morning News endorsed Sadler for the U.S. Senate; amazing in that the paper has almost always recommended the Republican candidate.  That’s why I scratch my head in confusion every time some local right-winger hollers like a cow going into labor that the News has a leftist agenda.

Alas, I’m afraid Ted Cruz will win that coveted Senate seat next month.  When many Texans go to the polls, they seem to leave their brains in their vehicles, while making sure they have their guns.  It’s getting dangerous even for us moderates here in Texas.  And, the fact that a far-right fundamentalist like Ted Cruz could end up in such a powerful position doesn’t bode well for the United States as a whole.