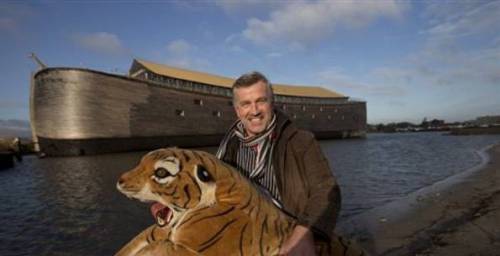 Huibers with a stuffed tiger and his “ark” in the background.

I thought replications of Noah’s Ark were strictly an American evangelical fascination.  So, I’m surprised to find out a man in the Netherlands has built a recreation of the Ark that would impress both Noah and Home Depot.  After a 20-year quest, Johan Huibers has completed a vessel measuring 427 feet (130 meters) long, 95 feet (29 meters) across and 75 feet (23 meters) high.  Huibers began his construction after a nightmare following heavy flooding of the Netherlands in 1992.  Already a devout Christian, Huibers saw that as a sign and used the Bible’s Genesis books 6 through 9, following the same instructions God gave Noah.  Despite the ship’s massive size, it’s not likely Huibers could fit two of every animal on board.  But, he might be able to fit plenty of tulip seeds and bags of hashish.