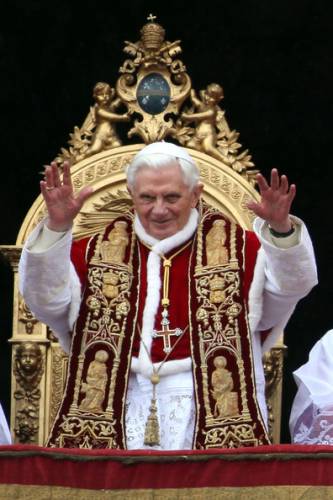 In a stunning announcement this morning, Pope Benedict XVI divulged that he would resign the papacy at the end of this month.  Less than eight years after he assumed the role of spiritual leader of the world’s 1.2 billion Roman Catholics, Benedict stated, in a formal announcement through the Vatican, “Strength of mind and body are necessary, strength which in the last few months has deteriorated in me to the extent that I have had to recognize my incapacity to adequately fulfill the ministry entrusted to me.”  In other words, he’s tired.

Elected upon the death of Pope John Paul II in April 2005, Benedict is only the sixth German to serve as pope and the first since the 11th century.  Born Joseph Ratzinger in Bavaria, Germany in 1927, he was drafted into Germany’s anti-aircraft force at the age of 16 and then, a year later, drafted into the regular military.  He was eventually sent home, but then drafted again, before deserting in 1945.  He was captured by American soldiers and held prisoner until after World War II in Europe ended.  He immediately began attending seminary school at the University of Munich and was ordained a priest in 1951.  At the Second Vatican Council, Ratzinger served as a chief theological expert where he was viewed as a reformer.

That contrasts with his contemporary and staunchly conservatives views about the Church and the various roles people must play in the world.  This included his harsh opposition to any form of birth control; his condemnation of condom usage in Africa to stem the spread of AIDS; and his refusal even to consider allowing women into the priesthood.  Critics also noted Benedict seemed reluctant to address the pedophile priest scandal that was bombarding the Church when he entered the papacy.  And, although Benedict declared religious freedom was a “path to peace,” he criticized Islam in a 2006 speech by reiterating the words of 14th century Byzantine Emperor Manuel II Paleologus who said, “Show me just what Muhammad brought that was new, and there you will find things only evil and inhuman, such as his command to spread by the sword the faith he preached.”  That didn’t give Muslims a warm, fuzzy feeling, but then again, Muslims – like Jews – often don’t take any form of criticism lightly.

The papacy is a lifetime appointment; therefore, popes historically have held onto their posts until death.  Benedict is the Church’s 266th pope and now becomes the first to resign in 598 years.  The last was Gregory XII who reigned from 1406 to 1415.  During his papacy, there were two anti-popes, Benedict XIII and John XXIII.  These anti-popes were the products of a division know as the “Western Schism,” which began in 1378 when the papal throne was moved from Avignon, France to Rome under Pope Gregory XI.  In order to end the hostilities, Gregory XII resigned at the Council of Constance, along with Benedict XIII.  John XXIII was deposed.  They were all replaced by Martin V in 1417.

The Western Schism is often confused with the “Eastern Schism,” which began around 1054, when philosophical differences between the eastern, Greek-speaking members of the early Christian church and the western Latin-speaking members caused relationships to disintegrate.  The Church then split, culminating in the creation of the Roman Catholic Church and the Eastern (Greek) Orthodox Church; a division that remains to this day.

Here the other popes who resigned.

Pontian ruled from A.D. 230 – 235 and was the first pope to resign.  He was allegedly forced to abdicate by St. Hippolytus, a high-ranking Church official, and exiled to a Sardinian mine.

Marcellinus ruled from 296 – 304 and either resigned or was deposed after complying with the orders of Emperor Diocletian to offer sacrifices to pagan gods.

Silverius ruled for only a year, beginning in 536, before he was forcibly removed by Empress Theodora, wife of Byzantine Emperor Justinian I, both of whom favored the Monophysites; a sect that believed in the concept of monothelitism, which stated that Jesus Christ had only one will, even though he possessed both human and divine natures.  That was considered heresy by the Church.  Silverius was exiled to the island of Palmaria where he died of starvation a few months later.

Martin I ruled from 649 – 655 and was forced to resign by Emperor Constans II, a Byzantine leader who supported monothelitism.  Years earlier Pope Theodore I had dispatched Martin to Constantinople to conduct an “ecclesiastical deposition” against Pyrrhus of Epirus, a Greek general who had attacked Rome around 279 B.C.

Benedict V was elected pope in May of 964 upon the assassination of John XII, but was deposed a month later by Emperor Otto I of Germany who replaced him with Leo VIII.

Benedict IX was only 11 years old when he assumed the papacy in 1032.  (Other sources say he was 12.)  Papacy ran in his family, as two of his uncles had been pope.  Benedict’s family used their wealth and power to garner the position for him, so in some ways, things haven’t really changed in the Catholic Church.  He resigned in 1048 upon selling the papacy to his godfather who became Pope Gregory VI; marking the first and only time the papacy has been sold.

Ironically, Gregory VI was forced to resign just a year later for the crime of simony, selling church pardons and offices.  Again, not much has changed.

Celestine V was 80 years old when he was elected pope in 1296, but held the position only 6 months before resigning.  He apparently developed a fondness for solitude as a young monk and, in 1254, founded a religious order devoted to quiet prayer and meditation; an order that was later named after him.  He evidently enjoyed that hermit lifestyle so much he decided the papacy was too much excitement for him, so he announced his resignation.  This came as a shock to the Church hierarchy, since his election had come two years after the death of Pope Nicholas IV.  Celestine was replaced by Boniface VIII.

This all makes for some fantastic historical study, but Benedict’s departure means little to me personally.  As a recovering Catholic, I see no real use for a monolithic institution that systematically oppresses more than half of the world’s population (women) and ignored the perpetual rape of thousands of helpless children.  The Roman Catholic Church is also one of the world’s wealthiest entities – which is why they can pay out millions of dollars in settlement claims and lawsuits – yet stand by as untold millions of faithful struggle daily amidst crushing poverty.  It would benefit humanity if the Catholic Church collapses in the wake of Benedict’s exit and takes every other Christian chimera with it.  Alas, that won’t happen any time soon.  Although I came to my senses and stopped bowing to Catholic ideology years ago, too many other helpless souls still retain some adherence to it.  I can only hope they see the light – and go towards it.