Pig on a Stick 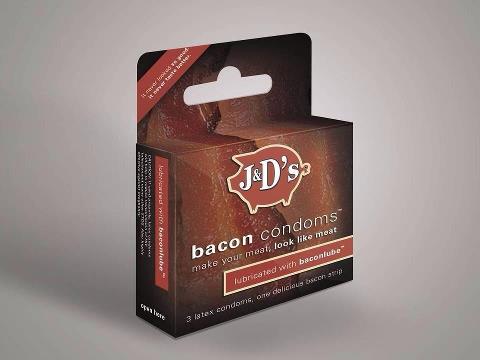 Sometimes you have to do whatever it takes to keep the masses interested.  J&D’s Foods has come out with a bacon-flavored condom, a latex prophylactic that literally looks like a slab of bacon and smells like one, too.  Considering that sex produces a variety of smells – with or without condoms – this might be an improvement on one of humanity’s favorite past times.  J&D co-founder Justin Esch says the company worked with the U.S. Food and Drug Administration to ensure the condom met with safety regulations.

“The FDA is involved and there’s a lot of testing that goes on,” said Esch.  “We could have made novelty condoms, but really, what fun is that?”

Yes, of course, and what fool wouldn’t take bacon-flavored condoms seriously?  Fortunately (or maybe not), the condoms just smell like bacon, but don’t feel like it.  I mean, if you prefer your bacon extra-crispy, that might be a challenge.

This whole thing might speak to America’s obsession with greasy foods, but I’m quite certain a lot more men will suddenly want to practice safe sex.  I just wish I’d known about the testing phase, so I could have volunteered.  I’m always looking for a free meal!

2 responses to “Pig on a Stick”