I mentioned this last year, on the 49th anniversary of Kennedy’s death, but I wanted to bring it up again on this special occasion.  My car fetish knows few bounds, even though it’s limited to most anything pre-1980.  That includes the vehicle Kennedy was riding in that fateful day: a 1961 Lincoln Continental X-100.  It was a 4-door convertible, and X-100 was its Secret Service code name.

Ford Motor Company assembled the car at its Lincoln plant in Wixom, Michigan in January 1961.  Hess & Eisenhardt of Cincinnati, Ohio customized the vehicle to function as a presidential parade limousine; literally cutting it in half, reinforcing it, extending it 3½ feet in length and making numerous other modifications.  Ford Motor Company and Hess & Eisenhardt collaborated on engineering and styling.  It debuted at the White House in June 1961.  The car remained the property of the Ford Motor Company, which leased it to the Secret Service for $500 per year. 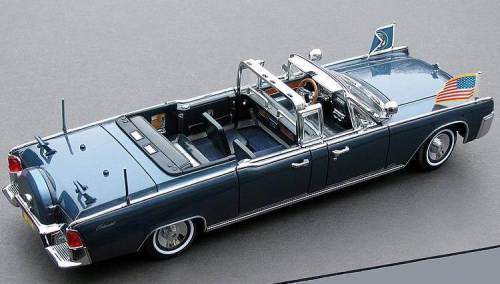 Special features on the limousine included:

I have a replica of this car by Yat Ming, which is part of its “Presidential Limousines” collection.  Yes, it’s made in China, but I love it anyway.  And, I know owning such a thing sounds macabre, yet the vehicle is an indelible, albeit tragic, part of our nation’s history.

“The Strange Saga of the JFK Assassination Car.”