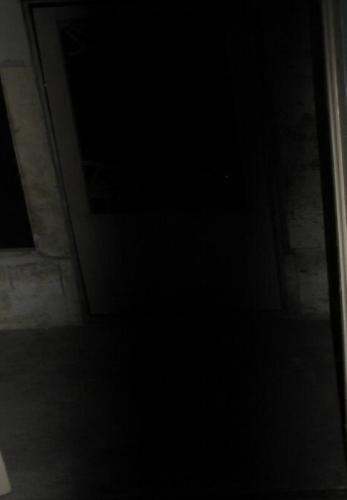 This is based on an actual experience I had some time in the fall of 1995.  Make of it what you will.

I heard breathing – heavy, steady breathing.  My eyelids jumped open, and I caught sight of the ceiling fan.  Where was I?  It took me a moment.  I was in my bedroom.

What was that?  There was an animal in the room with me, beside my bed.  But, I didn’t own a pet. I was alone in my one-bedroom apartment.

I’d been fast asleep.  Then, the breathing woke me up.

I turned to my clock.  It was just after 3:00 in the morning.  Dead time.  When the spirits come to life.

But, I kept thinking – it was an animal.  But, what?  What kind?  What animal had made it into my apartment and curled up beside my bed?  At this time of the morning?  I never left the window or the patio door open.  The front door was always locked, especially at night.  I lived in a nice suburban neighborhood.  It was a quaint little apartment complex.  No one bothered me, and I bothered no one.  It didn’t back up to a stand of forest, or a farm.  Hardly anyone here had a pet.  So, what animal had managed to sneak in here?

I listened to it for the longest time.  Something was there – lying on the floor.  It was on the left, next to the clothes hamper – and close to the doorway. Should I decide to make a run for it, I’d probably have to jump over it.

That’s if I could move.  And, I couldn’t move.  I was frozen beneath the single sheet – stiff – paralyzed with fear.  My heart started to thump hard against my chest.  My throat undulated, and my hands trembled.  I wanted to move.  But, after glancing at the clock, I couldn’t.  My body had stiffened.

I was in the midst of a nightmare, I told myself.  Yes, that’s what it was.  I was having a really bad dream.  I’d been having a lot of those lately.  What with problems in the family and the stress at work – I had trouble sleeping.  Yes, it was a stupid nightmare.  A nightmare – in slow motion.  But then, why did I look at my clock?  Unless your dream involves Salvador Dalí, how would a clock come into the picture?

It was still breathing.  Whatever it was – it was sleeping – or waiting.  Oh God.  Waiting for what?  I couldn’t move.  It could take me now.  This wasn’t a dream.  Something was there.

And, I got the sense it was something – bad.  Something – evil.  What demonic entity had entered my bedroom at this time of night and camped out on the floor?

I kept listening to that steady breathing – and wondering what it was and why it was there.

Then, it dawned on me.  I’d been so depressed.  My entire life had been turned upside down by crap at work and things in my family.  Everything seemed to be going out of control; occurring without my input, without my permission.  It had plunged me into a state of despair.  I was angry and upset all the time.  The only things that soothed my mind were jogging and jujitsu.  I’d run for miles.  I’d beat the crap out of a punching bag.

But, it didn’t settle my beleaguered mind.

So, I thought…well, it’s not worth it.  This world wasn’t worth the trouble.  Nothing – and no one – is helping me.

Breathing – breathing.  Long and steady.  It was still breathing.

And, as I listened to it – whatever it was – I suddenly realized – it wasn’t right.  I couldn’t just end it.  I was educated and smart.  I still wanted to travel.  I had a lot I wanted to get done.

And, I couldn’t do it dead.

More importantly, there were people who really cared for me.  Family – friends.

It’s not right.  I couldn’t just end it now.

My heartbeat slowed, and I began breathing normally.

I realized – I was worth something – to myself – and to so many people.

It’s not right.  I can’t do that to myself.  Or to my family and friends.  I couldn’t leave that legacy for them.  I just couldn’t.

And, whatever it was – on the floor next to me – it had been waiting for me to jump off that cliff.  And, into its jaws.

My left leg twitched slightly.  And then, my right one.  Then, I could shift my pelvis.

And then – the breathing.

I turned my head to the doorway.

Something lifted up – from the floor – a lumpish dark form.  It got up – and slinked away.  Through the open bedroom door.

Something had been there.

And, whatever it was – it saved me.

9 responses to “I Heard Breathing”