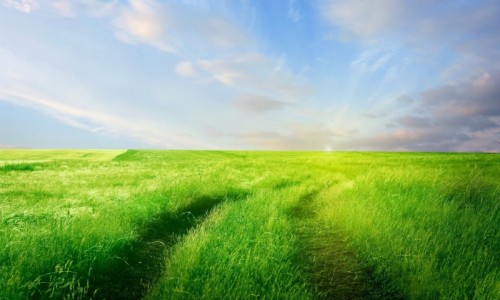 My father sat on a riding lawnmower; an interesting thing considering we’d never had one. But, as he traveled across a vast field of bright green grass, he came upon some people standing beneath a large tree; an oak, he thought. Getting closer to them, he realized they were some relatives: his parents, his oldest sister, his older brother and another sister. They all had one thing in common – they were deceased. He could see his parents clearly, especially his father who died in 1969. He could make out the face of his older sister. His brother looked to be in the shadows, and the other sister was cloaked in a black veil. But he knew it was them.

“Do you want to come with us?” his mother asked him.

My father turned to the expanse of grass and nodded his head no. “I can’t,” he told her. “I have to finish mowing.”

Then, he woke up. It was late 2004, and he abruptly snapped out of a depressive funk. He’d lost his second-oldest sister and his older brother within a five-month period that year. Our family was still reeling from that. But, when he recounted the episode to me, he wondered aloud if his time was coming sooner than expected.

“No,” I told him. “They were testing you. They wanted to see if you were ready to give up. But you obviously have a lot of things left to do in this world.” He’d always liked gardening, I reminded him; a trait he’d gotten from his mother. The large field of grass was just a metaphor for life.

What’s it like, I wonder, to be dead? How do people navigate in the afterlife? I’ve always been fascinated with that; what happens to people when they die. Unlike some people, I don’t pretend to know what exactly will happen to me once I expire. But, unlike others, I don’t believe this is it; our life here on Earth is all we get. I’m not so arrogant as to express a firm knowledge of such things. I just have my own beliefs.

When my father’s oldest sister died in February of 1998, we had a simple ceremony in a chapel at the cemetery and then watched her be interred in a place near her father. That’s how she wanted it: just throw her body into a box, drop her into the ground and go on with our lives. Nothing fancy; no drawn-out church mass; no miles-long funeral procession; and no rosary. When I told a close friend about it, he expressed shock that we didn’t have a rosary; a pre-funeral Catholic affair akin to a Protestant wake.

“I hate to tell you this,” he said matter-of-factly, almost ominously, “but your aunt’s chances of getting into Heaven are slim.”

If we’d been sitting face-to-face, I would have smacked him. “Who the fuck do you think you are?!” I screamed into the phone. I unleashed a slew of other invectives, before slamming down the receiver.

This came from a guy who was raised devoutly Catholic, like me, but who – at some point in his early 20s – detoured into voodoo. He had renounced the latter and returned to his Christian roots. Yet, his self-righteous proclamation about my aunt’s spiritual survival was more than an insult; it was an abomination.

Several years ago, while attending a Catholic parochial school, an antiquitous nun (I knew of no other kind) abruptly informed me and some other students that animals have no soul. They just die, she said, and that was it. I was horrified. Did that mean I would never see my beloved dog, a German shepherd named Joshua? I cried deep inside. How could that be? Why would God be so cruel as to deny we animal lovers the company of our pets in the afterlife?

Fortunately, I’ve long since recovered from the perversions of Roman Catholicism and Christianity in general. It’s one reason why I divorced myself from that mess – a sin unto itself. Religion makes people say and do stupid shit.

Theology or not, I’ve never really been afraid of the unknown. I’m not a Goth-like critter who looks for ingenious new ways to kill himself – well, not anymore. My fascination with death started when I was young; perhaps, because I really did think of killing myself. The relentless bullying I experienced in school and the loneliness of being an only child made me contemplate suicide when I should have been thinking about sports or games.

Now, as an adult, I still think about death, but not so much dying. I consider it the afterlife, or more appropriately, the after-this-life. It’s another level the human soul attains; a world superior to this one. I’m not eager to get there! I’m just curious about it. I tell people I have so many books I hope I get to read them all before I die. But then, maybe my after-this-life activities will include reading. And playing with dogs!