Food for the Soul

Paraguayan artist Koki Ruiz poses for a picture in front of an altar he built using corn and pumpkins, where Pope Francis will give the main mass on July 12.

As Pope Francis returns to his native South America for the first time since becoming head of the Roman Catholic Church, Paraguayan artist Koki Ruiz is ready with an edible altar. Composed primarily of thousands of ears of corn and pumpkins, Ruiz’s giant art piece conveys the mixed Indian and Spanish heritage of Latin America. It’s no accident he chose corn and pumpkins: both are indigenous to the Americas. Probably originating from an archaic plant called teosinte, corn was first cultivated in what is now central México as far back as 5,600 years ago. It migrated into North America around A.D. 200 and remains a staple of the Indian people’s diet. Seeds related to pumpkins found in México have been dated to 7000 B.C.

Ruiz’s altar is 131 feet (40 meters) wide and 45 feet (14 meters) high. I don’t know if its presence had an impact on Francis. After arriving in nearby Bolivia last week, the Pontiff did something no other pope – or any well-known Christian leader – has done. He acknowledged the Church’s role in both decimating the indigenous peoples of the Western Hemisphere and subjugating the survivors.

“I humbly ask forgiveness, not only for the offense of the church herself, but also for crimes committed against the native peoples during the so-called conquest of America,” he said.

I don’t anticipate we’ll hear anything similar from the Church of England or U.S. evangelical Christian leaders in our lifetime. Those clowns never want to admit they’ve done something bad, especially if no White people got hurt. But it’s a nice gesture on Francis’ part.

Corn and pumpkins survived the European conquest of the Americas and – despite what U.S. history school books say – so did the native peoples. On that note, let’s eat! 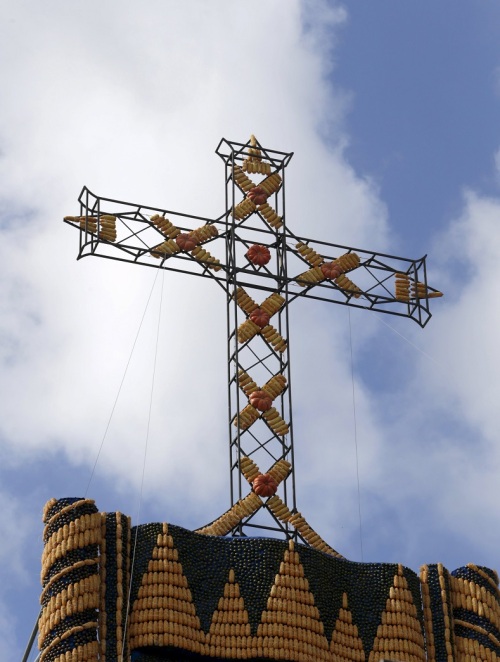 9 responses to “Food for the Soul”