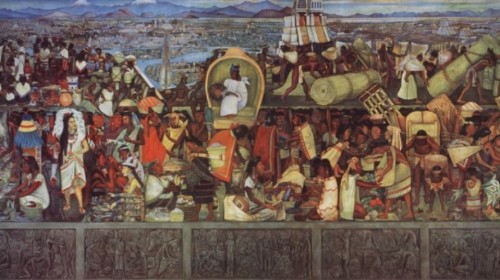 They have experienced the glory and the pain.

They have weathered through generous pride and torrid shame.

They have felt the hate and the love.

They have lived through peace and seen blood.

They worshipped then, as now, both sun and moon.

They have guarded their temples and slept quietly in their tombs.

They have fought savage invaders and their very own.

They have been dragged through dirt and scraped their bones.

They have suffered through individual and collective emotions.

They have seen painful strife and been betrayed by unwanted notions.

These are the people who looked down from the mountains and built a nation on a lake they named Texcoco.

These are the people of a land called México.

I wrote this poem in the early 1980s and had it published in 1984 in “Our World’s Most Beloved Poems”, a compilation of poetry by the World of Poetry Press.  There’s not much information available now on WPP.  They published my poem for free, but – of course – I had to buy the gigantic book in which it appeared.  Yes, it’s amazing how naïve people can be at the age of 20.

Odd, but I never considered myself a poet.  A writer, obviously; yet poetry generally ranked somewhere between Reader’s Digest and the local classified ads, as far as I was concerned.  Still, outside of my blog, letters to a newspaper editor and a couple of anonymous romance inquiries circa 1990, it’s the only thing I’ve officially had published.

6 responses to “A Land Called México”