Among all the personal effects that could survive a skirmish during the Civil War, a couple of tiny photographs seem unlikely candidates.  But, that’s exactly what turned up amidst the carnage of the deadliest conflict in United States history.  One picture of a young girl was found between the bodies of two soldiers following a battle in Port Royal, Virginia in June of 1862.  The other photograph – also of a young girl – was located in a Virginia farm field in 1865, just before the war came to an end.

Photography was still in its infancy in the 1860’s, but it had become a rather common means of recording the events of people’s lives.  Many Union and Confederate soldiers carried photos of loved ones into battle.  Photographers were assigned to Northern divisions and traveling photographers were the early version of photo booths as they visited encamped troops between battles and photographed them.

Photography was evolving from daguerreotype to ambrotypes and other mediums in which images were produced through a wet emulsion on glass and were more accessible to a wider audience.

Now, the Museum of the Confederacy hopes to identify the girls in these two particular photographs.  They admit their chances are remote.  There is no writing on the backs of these photographs, nor were there any notes tucked inside their small frames.

“We don’t know who they are and the people who picked them up did not know who they were,” said Ann Drury Wellford, curator of 6,000 Civil War images at the Richmond museum that has the largest collection of artifacts of the Confederate states, both civilian and military.  “They evoke an utter and complete sentimentality.”

Each photograph is in a hinged case with a leather or composite exterior.  The cases protected the fragile images, which include early photographic processes such as tintypes and daguerreotypes.

Regardless of how one feels about the Civil War, these photographs – and the countless others collected by the Museum – speak of an intimacy among families and a sense of humanity that only comes to light after people see the horrors of a battlefield.

Tagged as civil war, early photography, Museum of the Confederacy

This has to be one of the most intriguing stories I’ve come across.  Cathay Williams was a Black woman born into slavery who served in the U.S. Army immediately after the end of the Civil War.  She disguised herself as a man and used the name William Cathay.  There isn’t a great deal of information about her, but apparently Williams was born in Independence, Missouri in September 1842.  Her father was a “free man of color,” but her mother was a slave; thus, Williams also was considered a slave.  “Free people of color” was a term used to describe individuals who were of African or Negro descent in the Old South, but did not live as slaves.  Many of them were actually mixed Negro and Caucasian, known as “mulattoes.”  “Free people of color” was used primarily in New Orleans and the Louisiana Territory where a number of mulattoes lived.

During the Civil War, the Union military often forced slaves to work as cooks, launderers, or nurses.  But, when Williams was about 17, the 8th Indiana Volunteer Infantry Regiment pressed her into service.  For the next few years, Williams traveled with the infantry, accompanying soldiers on marches.  At one point, she was transferred to Little Rock, Arkansas, where she undoubtedly saw Negro men serving as soldiers; a site that may have inspired her desire for a military career.  When the Civil War finally ended, Williams was working at Jefferson Barracks near St. Louis, Missouri.

Despite the prohibition against women serving in the military, Williams enlisted in the U.S. Regular Army in November of 1866, passing herself off as a man.  Shortly afterwards, she contracted small pox.  Once she recovered, she rejoined her unit and was shipped to the New México Territory.  Whether because of the lingering effects of the small pox, or the heat, Williams frequently fell ill.  Finally, the post surgeon discovered she was a woman and informed the post commander.  Her commander discharged her in October 1868.

Williams remained in New México, however, working as a cook at Fort Union.  She later moved to Colorado where she entered into a short-lived marriage.  Here her life story becomes murky; she may have also worked as a seamstress and even possibly owned a boarding house.  Around this time, her story became public.  A reporter from St. Louis heard unsubstantiated reports about a slave woman who had served in the U.S. Army.  Surely questioning the veracity of such a claim, he inquired further and – certainly to his surprise – found out about Williams.  He traveled to Colorado to interview her at length.  In January 1876, details about her life, including her stint in the Army, appeared in The St. Louis Daily Times.

Williams’ life didn’t get any easier.  Around 1889, she entered a local hospital.  Why is unknown, but she remained there for a long time.  In June of 1891, she applied for a disability pension based on her military service.  There was precedent for it.  Two women, Deborah Sampson and Mary Hayes McCauley, had been granted pensions for disguising themselves as men to serve in the American Revolutionary War.  In September 1891, a doctor examined Williams and determined she didn’t meet the criteria for a pension.  By then, she already suffered from diabetes and had had all her toes amputated.  But, her application was rejected.  What happened to Williams afterwards is another one of the many unknowns that clouds her life, as is the exact date of her death and where she’s buried.  She’s believed to have died around 1892. 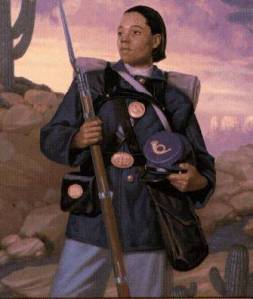 Why Williams would want to disguise herself as a man and join the U.S. Army is as perplexing as it is anomalous.  Perhaps, like many women of her day, she saw the degree of independence a man experienced when he was a soldier and the level of respect he incurred.  Outside of marriage and motherhood, women had few choices in 19th century America.  As a non-Caucasian woman, Williams was a double minority – then as now.  Still, this is a fascinating and yet uniquely American tale.  Whatever motivations Cathay Williams may have had, her accomplishments should not go unnoticed.  Women helped build this country, too, and many of them – especially Negro, Hispanic, Native American and Asian women – have had their life’s achievements relegated to the dusty corners of our national history.  It’s way past time for these stories to be brought to light and given the respect they deserve.

Thanks to the Le Artiste Boots blog for bringing this to my attention.

Black History and the Art of Denial

This extraordinary editorial by Leonard Pitts who writes for the Miami Herald could just as easily have the word “Indian” in place of “Black.”  It’s amazing that – more than a decade into the 21st century and more than fifty years since the start of the modern civil rights movement, with a biracial president in the Oval Office – the issue of race and ethnicity in this country hasn’t waned.  When I consider some South Carolinians’ celebration of the sesquicentennial of the start of the Civil War in 2010 – insisting the conflict was all about states’ rights – it’s as depressing as it is aggravating.  While some White southerners have been fighting the Civil War since 1860 (and still haven’t won!), others continue to believe Christopher Columbus really did discover America.  Change may come slowly on the cultural front, but as Jorge Santayana said, “Those who cannot remember the past are condemned to repeat it.”  And, remembering the past means remembering it exactly as it happened; not as people wish or thought it had happened.