Life Was Better on Coke!

It’s difficult to believe now, but a little more than a century ago, cocaine was perfectly legal in the United States and many other countries. In fact, cocaine was once a key ingredient in Coca Cola – hence, the name – a fact the company doesn’t discuss too readily. Before scientists realized the intensity of cocaine’s psychoactive drawbacks, it was a widely-prescribed medicinal remedy for just about everything from hay fever to tooth aches.

As the U.S. continues its treacherous “War on Drugs,” some in the medical community are actually daring to re-consider the potential value of the coca plant. The indigenous peoples of South America’s Pacific coastal areas cultivated the plant for millennia. Knowing that these were the same folks who charted the planets and constructed buildings that remain standing today, they might have been on to something.

Still, take a look at these late 19th century editorials describing cocaine’s benefits and wonder – like I do, sitting at the computer all day – if the agonizing blogger’s butt could be a thing of the past. 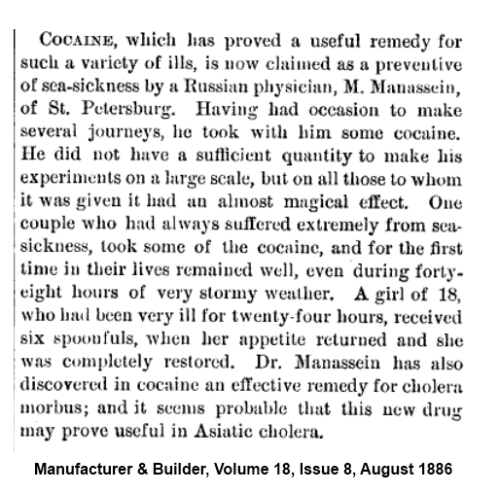