A Kiss Is Still a Kiss 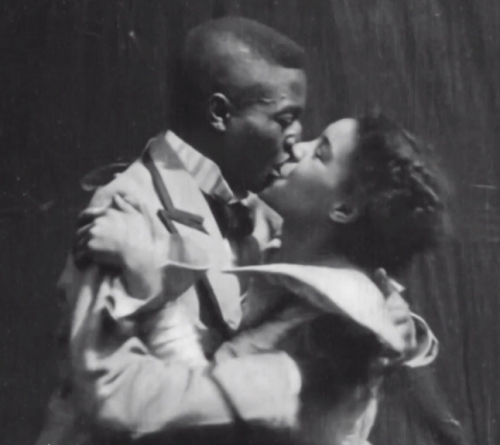 Saint Suttle and Gertie Brown in the newly-discovered “Something Good–Negro Kiss”.

Little treasures from the early days of cinema keep popping up.  That’s what Dino Everett, an archivist at the University of Southern California (USC), discovered in a 19th-century nitrate print hidden among a batch of silent films originally owned by a Louisiana collector. The clip, shot on a Lumière Cinématographe, turned out to be an 1898 short entitled Something Good–Negro Kiss, which is now the earliest documented film of open affection between a Black man and a Black woman.

Everett later told his students, “I think this is one of the most important films I’ve come across.”  He really had no idea.

Everett contacted the University of Chicago’s Allyson Nadia Field, an expert on African-American cinema.  Using inventory and distribution catalogues, Field traced the film to Chicago and learned it had been shot by William Selig, a pioneer in film production and a former vaudeville performer.  With help of the Museum of Modern Art in New York, Field also identified the performers: Saint Suttle and Gertie Brown.  Suttle is dressed in a dapper suit and bowtie, while Brown dons an ornate dress — costumes that Field says were typical of minstrel performers.

Something Good is a restaging of Thomas Edison’s The Kiss (1896), one of the world’s earliest motion pictures.  Scandalous for its time, The Kiss featured stage performers John C. Rice and May Irwin engaging in a graphic display of physical affection.  Both Rice and May were popular figures of the minstrel entertainment circuit, and perhaps the title of this newly-discovered film, Something Good–Negro Kiss, is deliberately subverting the racism inherent in American minstrelsy.

Image and video courtesy of USC School of Cinematic Arts