Shut Up and Draw 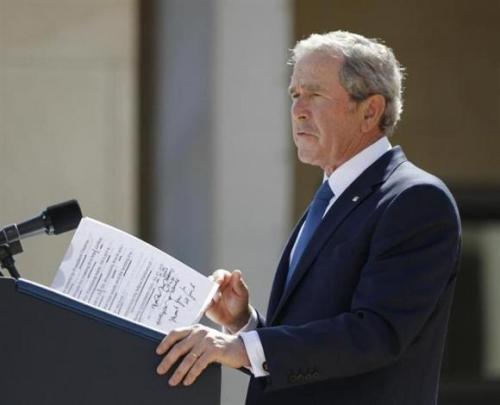 George W. Bush delivers remarks at the opening of his library in Dallas on April 25, 2013.

“I no longer feel that great sense of responsibility that I had when I was in the Oval Office.  And frankly, it’s a liberating feeling.” – President George W.Bush, to a high school graduating class in Roswell, New México, May 2009.

Countless numbers of Americans, especially several military families, wish we could liberate ourselves from the dismal legacy of the Bush Administration.  Unfortunately, we’re stuck with it.  But, survivors of military personnel killed in the Afghanistan and Iraq Wars bear relentless pain and anguish.  Anyone who enters the military has to accept the fact that they could be called to war and therefore, prepares as best they can for it.  Their parents, spouses, children and other relatives try to prepare themselves, too.  But, it’s still not easy losing a loved one to a foreign conflict.

Recently, Bush launched an initiative to help our military veterans transition back into civilian life as smoothly as possible.  My own conversations with past veterans made me realize how difficult this can be.  Through his Bush Institute, the 43rd president is imploring companies to recruit and retain military veterans, believing their tendency towards self-discipline and teamwork makes them among the best employees.

“We’ve got a problem, too many vets are unemployed,” said Bush.  “There’s what we call a military-civilian divide.”

He just figured this out?  It’s a noble cause, though.  The unemployment rate for military veterans remains around 10% as of 2013, compared to 7% for the general population.  A few times in recent years military veterans working for staffing agencies have contacted me about various technical writing positions.  The moment I hear them say they were in the military, I stop the conversation and tell them how much I appreciate their service.  It usually catches them off-guard.  But, in turn, they appreciate just hearing someone tell them that.

However, Bush has gone further and also issued a challenge to the medical community to drop the word “disorder” from the term “post-traumatic stress disorder.”  PTSD is a relatively recent term in the lexicon of psychological afflictions.  It used to be called “shell shock” or “battle fatigue.”  Many thought it was just a phase; almost an imaginary disorder.  But, it’s real and it’s painful for its sufferers and the people closest to them.

Bush, nonetheless, believes the “disorder” word stigmatizes the affected individual and makes them sound defective, or unable to be rehabilitated; therefore, he states, they may have trouble finding work in an already-fragile job market from employers who are weary of difficult people.

Gosh, how thoughtful.  It’s also hypocritical.  Like his Vice-President, Dick Cheney, Bush used just about every excuse to avoid military service when his country called upon him more than four decades ago.  An average high school student and occasional troublemaker, Bush managed to enter Yale University in 1964 and graduate four years later with a business degree.  Upon his graduation, his draft deferment ended.  The nation was mired in the depths of the Vietnam War, with public sentiment against the conflict (and the men who served there) becoming more vehement.  Still, Bush managed to secure a relatively cushy spot in the Texas Air National Guard.  Large numbers of young men were trying to do the same, and – according to some records – all of the spots in the Guard were taken.  I guess it didn’t hurt that his father was a U.S. congressman at the time.  Bush reenlisted in 1972 and was honorably discharged from the Guard two years later.  Questions remain about his level of attendance and whether or not he even completed his service.  His military records mysteriously vanished, and the Pentagon later claimed they were inadvertently destroyed.

I’ve always found that to be a rather convenient explanation.  A friend who served in the U.S. Air Force for twenty years, including several tours of duty in Vietnam, still has his military records.  All military personnel, he told me and several others more than a decade ago, are legally allowed to keep copies of them.

Dick Cheney, on the other hand, never did even that much.  He garnered five military draft deferments around the same time: four educational and one because he was a new father.  “I had other priorities in the 60s than military service,” Cheney said in 1989.

Words and actions always come back to haunt people.  I understand that no one wants to go into battle.  War is ugly and dirty; it is one of the most vile of human interactions.  But, hearing Bush trying to make nice with the people he sent to war is revolting.

The Iraq War is the crux of my anger.  It’s a conflict based solely on lies and innuendoes.  Abusing the international support brought on by the September 11, 2001 terrorist attacks, the Bush Administration created a tenuous link between Al-Qaeda and Iraqi dictator Saddam Hussein.  I believe the sole purpose was to gain access to the vast reserves of oil beneath Iraqi soil.  Proof comes in the fact that Halliburton (the energy conglomerate that Cheney headed before resigning in 2000) received a slew of no-bid government contracts.  For example, almost as soon as the U.S. invaded Iraq in March of 2003, the Army awarded Halliburton a no-bid contract to rebuild Iraq’s infrastructure.  Boots had just hit the sand and blood was still dripping while gilded corporate executives were salivating over big payouts.  While not necessarily illegal, no-bid contracts are certainly unethical and, in this case, highly suspicious.

War is fought by the grunts on the ground, but it’s waged by well-dressed power brokers in far-away skyscraper office suites whose idea of pain and agony is a paper cut.  It’s pretty much been that way for the past century.

As part of his retirement from public life, Bush has taken to painting.  He took up the hobby almost as soon as he departed the White House.  While his works may not earn him a spot in “International Artist” magazine, they’re being prominently displayed – (where else?) – in his presidential library.

In the spring of 2005, my-then supervisor at an engineering company, a coworker and I lived and worked in northeastern Oklahoma on a special project for the government agency where our firm had a contract.  We’d fly into Tulsa, rent a car and drive to the hotel in the far northeastern quadrant of the “Sooner State.”  One morning, as we prepared to board a flight in Dallas, I noticed a large group of people in military fatigues gathered nearby.  After a few moments of observing them, I approached the group and personally thanked each of them for their service.  They all seemed genuinely surprised that I – a total stranger – would do something like that.  But, it meant a lot to me that they were making such personal sacrifices.  In retrospect, I wonder how many returned alive, or at least undamaged.  I guess I’ll never know.

I’ll keep thinking about them, though, and I hope Bush just keeps painting.  He and the other clowns in his administration have done enough damage.