“Mainstream Catholics want leaders who can address the moral challenges of our day like income inequality, underwater mortgages and poverty, not leaders who perpetuate a never-ending culture war that divides our community.” 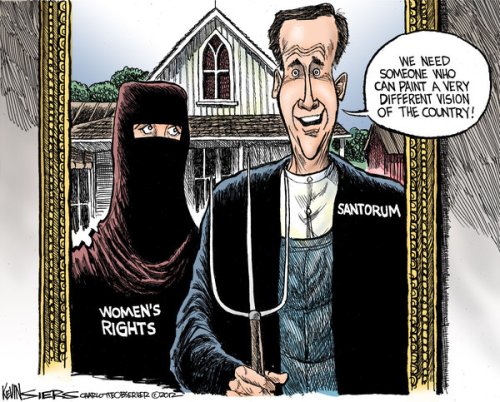 “Early in my political career I had the opportunity to read the speech and I almost threw up.”

Now Santorum is trying to back away from that repulsive and dramatic statement.  You can’t put toothpaste back in a tube (although some have tried), and Santorum can’t do much to make up for such an idiotic description.  Santorum isn’t half the man that Kennedy was in his short life and probably never will be.  The thought of Santorum in the Oval Office –with his medieval views of society and the various people who occupy it – makes me want to throw up!  Fortunately, most Americans – even conservative Republicans – are too moderate and logical to let this clown get that far.

“I don’t believe in an America where the separation of church and state are absolute.  The idea that the church can have no influence or no involvement in the operation of the state is absolutely antithetical to the objectives and vision of our country.  To say that people of faith have no role in the public square?  You bet that makes me want to throw up.”

Here’s a refresher for Santorum and other like-minded religious zealots.

Bill of Rights – Amendment I:

“Congress shall make no law respecting an establishment of religion, or prohibiting the free exercise thereof; or abridging the freedom of speech, or of the press; or the right of the people peaceably to assemble, and to petition the government for a redress of grievances.”

“I understand why Barack Obama wants to send every kid to college, because of their indoctrination mills, absolutely.  The indoctrination that is going on at the university level is a harm to our country.”

Santorum and Beck mulled over a number of social and political issues, but hearing them converse about education is like Abbott and Costello discuss quantum physics.  Higher education makes people think outside the religious and social boxes in which their families and communities place them.  Therefore, in Santorum’s convoluted view, it’s better for them not to go to college and just stay ignorant.  I guess that’s why he and Beck get along so well.  Add Sarah Palin into the sloppy mix and it’ll be the holy trinity of stupid! 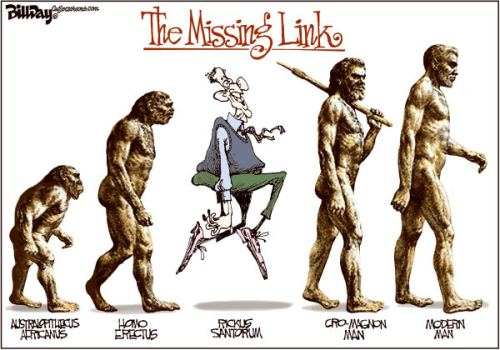 Personal observation: he apparently evolved just after homo-erectus.  Being a recovering Catholic, I feel I’ve evolved, too – homo and erect. 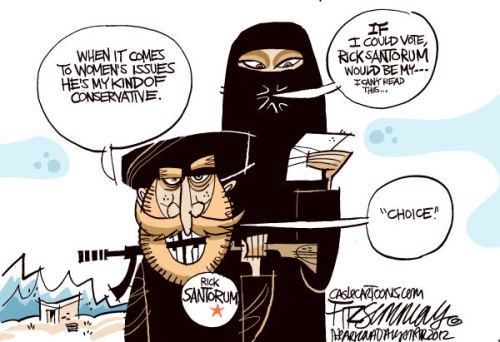 Yea!  Keep those bitches in their place!

“You have to ask him.  I cannot answer that question for anybody … He has said he’s a Christian, so I just have to assume that he is.”

— Franklin Graham, evangelist and son of Billy Graham, saying in an interview he cannot say for sure that President Obama is a Christian.  Later in the same interview Graham said he is certain that Republican presidential contender Rick Santorum is a Christian.

Which is like saying, “I’m not sure if the Earth is round.  I think it’s round, but I’m still not sure.  I have to go to the edge myself to find out.”

“I want to create every opportunity for women to be able to serve this country …but I do have concerns about women in front-line combat.  I think that could be a very compromising situation, where people naturally may do things that may not be in the interest of the mission because of other types of emotions that are involved.” 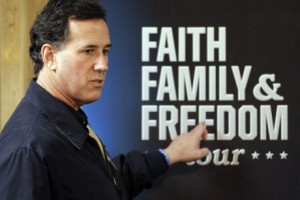 He later backtracked and said he was talking about the emotions of the men in the military.  I think I understand his logic.  The men will be too upset at the sight of women alongside them in the front lines, especially if the women get hurt, because it’s the natural instinct of men to protect women at all costs (think Titanic or Valentine’s Day).  And, if men in combat are too overwhelmed with emotions at the sight of injured females, then they won’t be able to focus on the mission at hand, which will be to kill other men who are trying to do harm to Americans; e.g. Al Qaeda, PETA.  So, in a sense, placing women in combat is a liberal plot to destroy the U.S.  Of course, any woman who’s given birth knows a thing or two about pain and agony, especially Catholic women like…well, like Mrs. Santorum. 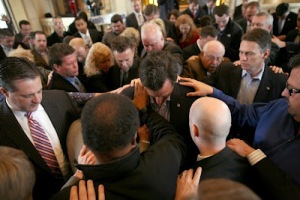 GOP Presidential candidate Rick Santorum in a “prayer circle” at a church in Allen, Texas.  This is so odd – a bunch of Texas evangelicals surrounding a Roman Catholic from Pennsylvania.  It’s sort of like Custer being surrounded by the Sioux.