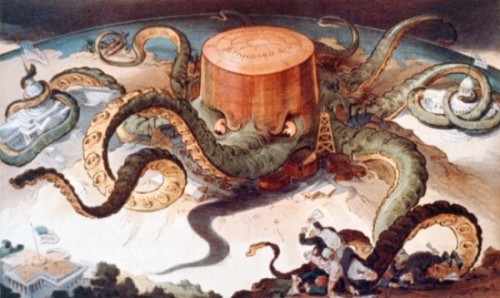 At the beginning of the 20th century, Standard Oil was the world’s largest corporation; it was also the first multinational corporation – until the U.S. Supreme Court dismantled it in 1911, as part of anti-monopoly wave that had commenced with the Sherman Anti-Trust Act of 1890.  Today’s Exxon-Mobil Corporation is a direct descendant.  In 1904, “Puck Magazine” published a cartoon by Udo J. Keppler (son of founder Joseph Keppler) showing a Standard Oil tanker as an octopus with a wicked gaze; its tentacles wrapped around various political establishments, such as the White House.  The message was clear: big oil had its grip on the halls of power.

Flash forward a century later and we have to ask – have things changed much?