The Royal Family that Laid the Golden Egg 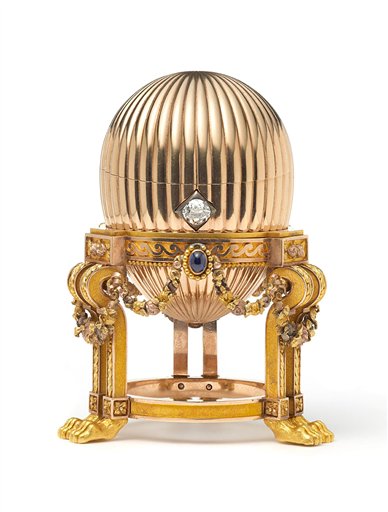 Not for scrap – this Faberge Egg is worth a few million and some change.

I don’t know what it is about Faberge Eggs that fascinate people – people, like viewers of “American Idol” and patrons of Botox parties, who have too much damn time on their hands.  To me, eggs are something that comes out of a bird’s ass and ultimately ends up in pancake batter or an omelet.  I mean, Faberge Eggs have to be the gayest things since “Star Trek” (come on – go-go boots; bell bottoms; perfectly-coiffed hair; phasers instead of real guns).  But, I find even this particular story intriguing.

Last week – and just in time for spring – a scrap metal enthusiast walked into the London shop of antique dealer Kiernan McCarthy and bought a Faberge egg for about $14,000 (EUR 10,1200); hoping to profit from its gold content.  But, a closer examination of the item made the customer think he was a rare Russian artifact.  As luck and good fortune often shines upon those not looking for them, the egg turned out to be an imperial Faberge Easter egg made for Russian royalty that’s worth millions.

The egg contains a Vacheron Constantin watch and sits on a jeweled gold stand.  It was given by Tsar Alexander III to his wife Empress Maria Feodorovna for Easter 1887.  Faberge made 50 of the imperial eggs for the Russian royal family, and eight remained missing until now.  Only three of those, however, are known to have survived the 1917 Russian Revolution.

This particular egg will be on display at London’s Wartski Antique Dealers, which specializes in Russian artifacts and Faberge Eggs.