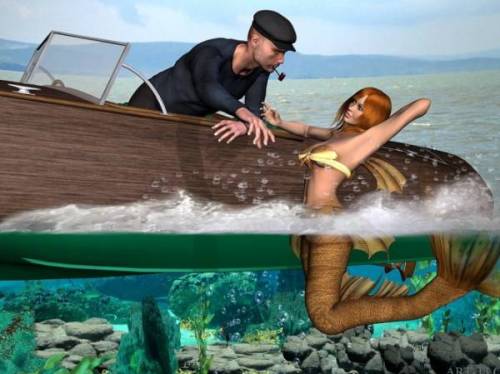 After years of study and millions of dollars, the National Oceanic and Atmospheric Administration (NOAA) finally confirmed one of my worst fears: mermaids do NOT exist.  Damn!  Now, we have one less reason to save the world’s oceans.  In a formal statement released last week, NOAA officials proclaimed:

“No evidence of aquatic humanoids has ever been found.”

Aquatic humanoids, sea apes, mermaids, merdudes – whatever!  We can now rest assured that, for centuries, sailors and navigators really have been hallucinating from alcohol, sun stroke, scurvy or full testicle syndrome.  Fortunately, I’ve never had scurvy, but the rest of that mess can hurt like hell!  I can’t imagine being stuck at sea, with only warm water and starfish to consume.  One reason for the unusual response is a recent program on the Animal Planet entitled “The Body Found: Mermaid Sightings Throughout History.”  It’s rife with special effects that look great on screen, but ultimately cast doubt on the veracity of the people quoted; supposed scientists who claim a government investigation proved years ago that mermaids – or “aquatic apes” – really do exist in the world’s oceans.  They also claim the U.S. Navy’s use of sonar tests in the Pacific Ocean in the late 1990’s contributed to the mass beaching of whales and other marine life – including a purported humanoid creature in Washington state.  According to anonymous sources, a pair of teenage brothers stumbled upon this creature and used a cell phone video camera to capture the moment.  The program presented what at first looked like the actual video.  But, that’s where the producers lose credibility; it’s obvious the “video” is fake.  Check out the program and judge for yourself.  I think it’d be fascinating if these creatures turned out to be real.  Then, not only will National Geographic get some great photographs, stock in Sea World will go through the roof!