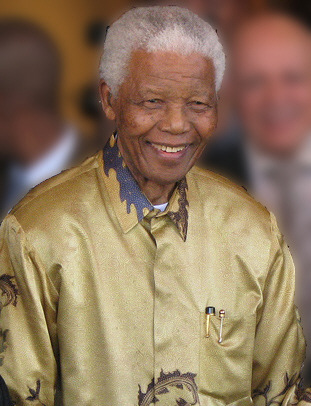 In case you missed it, Nelson Mandela turned 95 today.  The legendary human rights activist has few equals in the relentless battles for justice and dignity.  He was born Rolihlahla Mandela on July 18, 1918, in the tiny village of Mvezo, on the banks of the Mbashe River in Transkei, South Africa.  “Rolihlahla” in the Xhosa language literally means “pulling the branch of a tree,” but is often translated as “troublemaker.”  For Mandela, that turned out to be a good thing.  Throughout most of his left, South Africa was a staunchly and racially segregated nation; where the descendants of Dutch and English settlers held the bulk of the wealth and power over the Black citizens who had occupied the region for millennia.  In 1942, Mandela joined the African National Congress, an organization devoted to reverting centuries of brutal oppression.  For his efforts, he was rewarded with a lengthy prison sentence and the label of terrorist.  He was finally freed in 1990 and rebuilt his life as a crusader for human rights.

He celebrated his birthday from a hospital where’s he been for several weeks now.  He doesn’t have many years ahead of him, but his legacy of hope and determination is unparalleled.