A Quarter Century of Webs 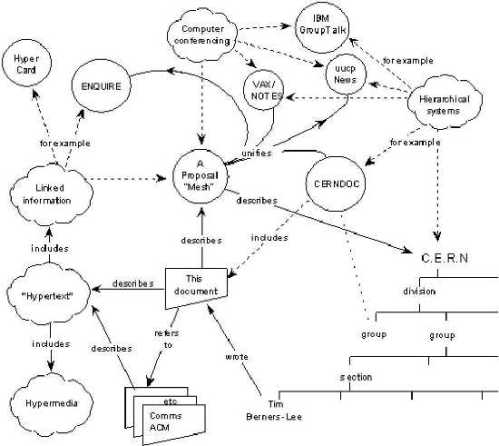 On this day in 1989, the Internet, as we know it, was born – at least on paper.  Like film, radio and television before it, the Internet technically had a slew of birth parents.  But, for the most part, one man figures critically in its creation: Tim Berners-Lee.

Born in London in 1955, Berners-Lee graduated from Oxford University with a degree in physics.  Immediately after graduating, he went to work for a printing firm, but in 1980, he began working as an independent contractor for CERN, the European Organization for Nuclear Research, in Switzerland.  There, he had to consult with other scientists and researchers from across the world, which presented unique challenges with varying time zones, languages and communication methods.  To facilitate the process, Berners-Lee began working on a project based on the use of hypertext, a data-specific language developed by Ted Nelson, an American scientist, in the 1960s.

Born in New York in 1937, Nelson apparently was diagnosed with attention deficit disorder (ADD) as a child.  His frenetic thought patterns (a hallmark of ADD sufferers) probably led him to create the hypertext system.

Berners-Lee called the prototype of his program “Esquire.”  He has been smart and gracious enough, though, to give credit to all of his computing predecessors, such as Nelson.  The concept of electronic mail (email), for example, was developed at the Massachusetts Institute of Technology (MIT) as a simple file-sharing system and first demonstrated in 1961.  That evolved into a system of message transmission MIT dubbed “Mailbox.”

Another early similar program was called “SNDMSG.”  That functioned in conjunction with another system called “Advanced Research Projects Agency Network” (ARPANET), which first appeared in 1971.

Accolades must also go to Douglas Engelbart who invented the computer mouse in 1963 and first demonstrated it five years later.  Like most inventors, Engelbart envisioned his creation in the usual manner: doing something completely unrelated.  In his case, he was driving to work when he imagined “people sitting in front of cathode-ray-tube displays, ‘flying around’ in an information space where they could formulate and portray their concepts in ways that could better harness sensory, perceptual and cognitive capabilities heretofore gone untapped.  Then they would communicate and communally organize their ideas with incredible speed and flexibility.”  But, even he can’t explain why he called his device (first made of wood) a “mouse.”

Berners-Lee took all of these ideas and materials and composed “Information Management: A Proposal” that he presented to CERN on March 12, 1989.  From that, he ultimately created the “World Wide Web.”  With the help of Robert Cailliau, a Belgian computer scientist, he presented the first version in 1990 and put it online the following year.  The first web page address was http://info.cern.ch/hypertext/WWW/TheProject.html.

His initial goal was merely to help CERN be more productive.  But, while Berners-Lee visualized a grander purpose for the “Web,” even he couldn’t predict the impact his creation would have on the world.

One response to “A Quarter Century of Webs”