The Sigma Alpha Epsilon fraternity at the University of Oklahoma in Norman, Oklahoma, March 9, 2015. The letters have been removed, and the building now sits empty.

Last August I published an essay describing my experiences in a social Greek-letter organization I’d attempted to join three decades earlier. It still remains one of the worst decisions I’ve ever made in my entire life. All of that came back to me recently, when the “racist chant video” incident from the University of Oklahoma (OU) exploded onto the national scene. In two different cell phone videos, members of the elitist Sigma Alpha Epsilon fraternity’s UO chapter were caught gleefully singing about the organization’s lack of Negroes.

The group was on a chartered bus last Saturday night, March 7, headed towards the Oklahoma City Golf & Country Club to celebrate the fraternity’s founding. Another student at the university, a young African-American woman, received links to the videos from someone she refuses to identify (out of concern for that individual’s safety); a person she declares wasn’t one of those who videotaped the incident. As videos are wont to do these days, the thing went viral, and now the reputations of one of the nation’s oldest fraternities and a major institution of higher learning are in jeopardy.

OU President David Boren reacted swiftly and ordered the fraternity to shut down. “You are disgraceful,” he publicly stated. “You have violated all that we stand for. You should not have the privilege of calling yourselves Sooners.” (Sooners is the nickname for OU students).

SAE’s national office stripped the OU chapter of its charter. The massive house where the boys lived has been emptied out; its residents forced to scramble for other living accommodations. In a sign of solidarity, Black and White members of the university’s football team staged a silent march instead of reporting for practice. Two of the guys leading the bus chant have been identified as Levi Pettit, 20, a graduate of Dallas’ Highland Park High School, and Parker Rice, 19, a 2014 graduate of Dallas’ Jesuit College Preparatory School. Both schools are elite entities with hefty tuition tags. Highland Park is actually a section of Dallas that, along with neighboring University Park, is known locally as “The Bubble.” The idea is not so much to keep residents insulated, but rather, to keep those of us who occupy the lower rungs of the social ladder out. I’m not exaggerating when I tell you the area’s own police literally used to stop Black and Hispanic motorists just to ask them what they were doing there.

It’s also befitting that graduates of those two schools would make their way into a fraternity like SAE. It’s a high-priced outfit. When I tried to join that fraternity at the University of North Texas, all of the social Greek-letter organizations would gather their pledges in one arena for an introductory session. The SAE boys all showed up in tuxedos. I called them the “Ken Doll Gang.” They stood against a wall, as if announcing, ‘Look, but don’t touch. I’m too pretty for you.’

I also met two Hispanic guys in the dorm where I first lived who had made attempts to join SAE, but dropped out because of what they perceived to be the frat’s subtle, racist attitude. It wasn’t something overt, they explained, but they could feel it. They really weren’t wanted; no matter how much money they could dish out. I didn’t want to believe it back then. I mean, it was 1984. Hadn’t we moved beyond that shit?

When the Oklahoma fiasco erupted, I returned to that question and realized, quite simply, no. Well…in some circles, no. Pettit and Rice have blamed a convenient scourge: alcohol. In other words, they were too drunk to know what they were doing. Poor kids; they’re too young and naïve to realize that shit doesn’t go over well in the real world.

Listening to that chant, though, I kept thinking it’s not something they composed on the spot. It sounds well-rehearsed. Pettit and Rice claimed they were taught the song while at the frat house and therefore, like toddlers, only repeated what others had uttered. Again, poor kids. Both young men apologized after they were expelled from OU. The Pettit family has hired a top-rated Dallas public relations specialist, and the Rice family has temporarily fled their home. Both OU and SAE are now trying to identify other students on that bus, including two young women who, some claim, are sorority members.

SAE is also now investigating cases where that very song was allegedly performed at other chapters, including here in Texas and elsewhere in Oklahoma, but also in Louisiana. This is just the latest in a long line of incidents where fraternities and sororities have engaged in blatantly racist behavior since 2000 alone. There are too many to mention.

Ironically, SAE’s OU chapter employed an African-American chef; a gentleman named Howard Dixon who is now unemployed because of this mess. A fund has been set up to help him adjust.

I’m not going to sling every fraternity and sorority member into the same pile of ignorant morons. It’s always the worst elements of any group that get the most attention. I still maintain that social Greek-letter organizations serve no real purpose in higher education. Other people feel they’re vital in fostering camaraderie and unity. That’s fine, if they want to believe that. But, if anyone thinks lynching is something worthy of light-hearted chants, just look at the photos below of actual “niggers” hanging and tell me you see nothing wrong.

Back in the spring of 1985, as I stumbled through life – trying to balance my disintegrating academic regimen and still hoping badly to be a part of that fraternity – a senior-level member gathered everyone in the house one night and self-righteously slammed us for not taking the organization seriously. He condemned the group for “chasing tramps” and going to clubs “listening to your nigger music.” Off to the side, somewhat behind me, stood the only Black man in the group. He said nothing – and neither did I. That was 1985. What year is it now? 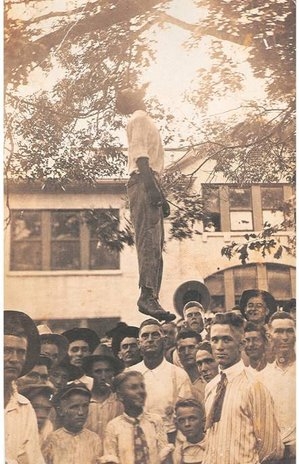