Where Are They Now?

A couple of weeks ago I watched the latest documentary series by Ken Burns, “The Roosevelts: An Intimate History.” It focuses on the three most famous members of this legendary family: Theodore, Franklin and Eleanor. They are also three of the most fascinating individuals of the 20th century, and this series only solidifies, in my mind, a deep longing for similar people in public life today. The Roosevelts were much like the Kennedy family of Massachusetts. They were ambitious, assertive, intellectual and strong-willed. Their progressive ideals and bold honesty shoved the United States onto a (sometimes unwilling) forward track. Yes, they were wealthy and traveled in elitist circles. But, for the most part, they had overwhelming respect for their fellow citizens. They were committed to public service, not politics. And, as the United States stumbles from one crisis to the next in this strange, new world of the 21st century, I have to ask where are people like the Roosevelts and the Kennedys now?

The U.S. never has had a royal family. Our official founders technically escaped European feudalism because of the vice grips that small bands of inbred groups had on their ancestral homelands. But, I’d have to say the Roosevelts and the Kennedys come close to American royalty. The Roosevelts produced two extraordinary presidencies, and the Kennedys produced one; albeit a tragically short one. Yet, both families charted progressive courses for the U.S. that ultimately gave freedom to so many of their contemporaries and challenged future generations to keep America as a beacon of democracy.

I’ve always viewed Theodore Roosevelt as a personal hero. It’s odd, considering he had been a sickly child burdened with asthma. As an adult, he suffered from depression. Yet, he grabbed life by the throat and rung every ounce of energy from it. He was a ball of lightning; unafraid to take on the notorious bosses of Tammany Hall and the ruthless titans of industry. A nature lover, he established the national park system.

His fifth cousin, Franklin, and the latter’s wife, Eleanor, helped move the nation closer to racial equality than anyone had before. Franklin broke from family tradition when he accepted a post as Assistant Secretary of the Navy in 1913 in the administration of Woodrow Wilson. He ran for the vice-presidency as a Democrat in 1920. After losing that race, he returned to a simpler life, enjoying his family and earning a living as lawyer. But, in the summer of 1921, while vacationing in New Brunswick, Franklin experienced a life-altering event: he contracted polio; then called infantile paralysis, a frightening and debilitating scourge (usually afflicting children) with no cure or vaccine. Franklin never regained use of his legs and could only stand or walk with the help of someone or something. He persevered, however, and became determined to heal himself as best as possible with lengthy stays at a resort he eventually purchased in Warm Springs, Georgia. There he could languish in a pool for hours, which eased the agony of twisted muscles and constricted joints.

But, Franklin also remained committed to life as a public servant. In 1928, he ran for and won the governorship of New York state. Four years later he successfully ran for president. He ran three more times, holding the office for an unprecedented 12 years.

Like his familial predecessor, Franklin Roosevelt wasn’t afraid to make bold decisions and launch big projects. Whereas Theodore took on various industries, such as oil and timber; compelled the U.S. Congress to mandate safe working conditions; and commence the national parks system, Franklin forced the federal government to take control of the slew of banks still faltering during the Great Depression; created the Civilian Conservation Corps; and introduced Social Security. Franklin’s predecessor, Herbert Hoover, and Hoover’s Treasury secretary, Andrew Mellon, boasted typically conservative attitudes about business and the economy: government had no real role in managing corporations; if a company – or even a bank – got itself into financial trouble, it was incumbent upon that entity to get itself out of trouble. Franklin knew that was true, but he also understood the true scope of the economic calamity afflicting the nation in the early 1930s. People were losing their jobs, their money and sometimes their lives, as banks folded. The crisis was gigantic in scope, and the hands-off approach of the Hoover Administration only exacerbated matters. Roosevelt created the Federal Deposit Insurance Corporation (FDIC) during his first year in office; an entity that would safeguard consumer bank assets and – slowly – reinstill trust in the nation’s financial institutions.

After the U.S. became embroiled in World War II, Franklin’s health began to deteriorate. He hardly campaigned in 1944. But, he didn’t give up. He was determined to lead the nation out of the war. Sadly, he didn’t see the day when America’s enemies surrendered, yet he maintained a high degree of spiritual vigor. He didn’t stop until his body forced him to do so.

Eleanor Roosevelt triumphed as well on many levels, but not really until after Franklin died. Like most of her female contemporaries, Eleanor had few choices in life. She had to be someone’s wife or someone’s mother, but she could never be her own person. A niece to Theodore and a distant cousin to Franklin, she felt uncomfortable in the role of First Lady. But, once she realized how desperately poor much of the nation’s citizens were because of the Great Depression, she pushed her husband to enact the strident and controversial legislation for which he’d become famous; not being given even a smattering of credit for it, of course, until decades later. Almost accidentally, she also became a torch bearer for the burgeoning civil rights movement; knowing that all Americans – regardless of gender, race or ethnicity – deserved to be treated equally. Not long after Franklin’s death, Eleanor prodded his successor, Harry S. Truman, to proceed with establishment of the United Nations and, later, battled for the “The Universal Declaration of Human Rights.” Her tireless efforts towards gender and racial equality made her an enemy of the staid social right-wing (even to the point of receiving death threats), but they helped her carve out her own legacy in the gallery of extraordinary Americans. “No one can make you feel inferior about yourself,” she declared in her book “This Is My Story,” published in 1939.

John F. Kennedy is another personal hero of mine, but not because he was the nation’s 35th president, or an heir to a prominent and wealthy Irish Catholic family. Like his older brother, Joseph, Jr., John Kennedy joined the military during World War II. Joseph was killed in action in August of 1944, and John nearly lost his own life in the South Pacific a year earlier. John had joined the U.S. Navy shortly after graduating from Harvard University in 1940. While commanding a torpedo boat, a Japanese warship rammed the small vessel. Despite severe injuries, Kennedy led other surviving crew members to a nearby island. His back never fully healed, and he suffered with the pain for the remainder of his life.

Before his stint in the Navy, however, John Kennedy attained a modest level of intellectual notoriety. In 1939, his father was appointed U.S. Ambassador to Great Britain. During a visit to England that same year, the younger Kennedy researched why the nation was unprepared to fight Germany at the onset of WWII. It became his senior-year thesis; a detailed analysis so well-received that it was published as “Why England Slept.” Kennedy launched the space race by challenging the U.S. to “land a man on the moon” before the 1960s ended – which we did.

Other giants of the 20th century shouldn’t go unnoticed: Wilson and Truman, of course, but also Dwight D. Eisenhower and Lyndon B. Johnson. Wilson was reluctant to jump into World War I (then called “The Great War”) and envisioned the U.N., which he called “The League of Nations,” a multi-national entity that forced the United States onto the world stage. Truman integrated the U.S. armed forces. Eisenhower jumpstarted the interstate highway system. Johnson signed into law some of the most important pieces of legislation of the modern age.

They were not without their faults. Theodore Roosevelt was essentially a racist in that he believed Caucasians were biologically superior. But, one has to consider that he was a product of his time, so I think he can be forgiven for that. A lot of otherwise good people felt that way back then. Franklin Roosevelt, John F. Kennedy and Lyndon Johnson were adulterers. Johnson may have been a modernist in regards to civil rights, but he also led the U.S. into the quagmire of Vietnam.

The closest the U.S. has to a political dynasty is the Bush family, which isn’t saying much. The Bush clan has produced two of the most dismal presidencies within a quarter century. Therefore, I lament the fact I can’t point to many notable political leaders right now. I placed a great deal of faith Barack Obama, when he first ran for office. Now, I’m disappointed in him. I know it’s not completely his fault. He’s dealing with an arrogantly recalcitrant Congress; a hodgepodge of right-wing extremists who are more concerned with banning gay marriage and instituting creationism into America’s educational curriculum than more critical tasks, such as punishing those responsible for the 2008 economic collapse and rebuilding our crumbling infrastructure. I’m certainly disappointed in U.S. Attorney General Eric Holder who just announced his resignation. Our elected officials are wrapped up in petty battles with one another.

There seem to be no big dreamers anymore – and I don’t know why.

Smartest Quote of the Week 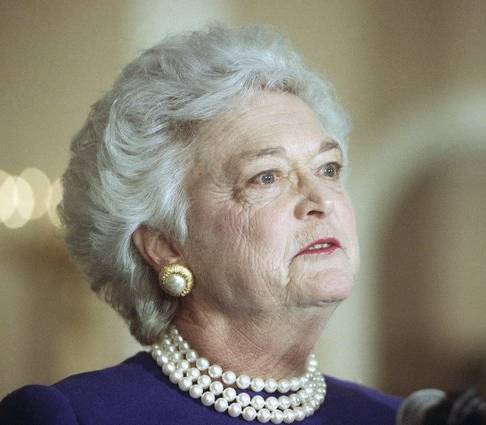 Grandma Bush in a rare moment of lucidity.

– Former First Lady Barbara Bush, to Matt Lauer on Today, about her son, Jeb, running for president in 2016.

Somebody throw cold water on my face!  I can’t believe this old woman actually said something halfway decent!  But, damn!  Where the hell was she 13 years ago?!