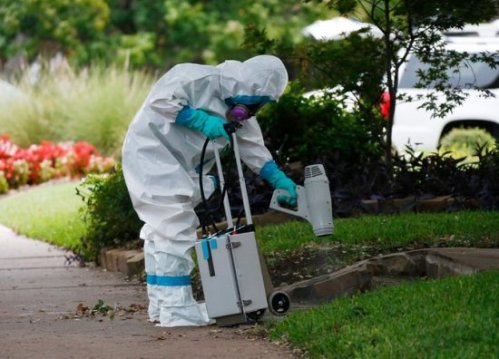 On October 5, a hazardous-materials crew cleaned outside the Dallas apartment building of a nurse who was infected with Ebola.

As some have feared and others predicted, the Ebola situation in Dallas has worsened. The man who became the first person diagnosed with Ebola in the United States was identified a couple of weeks ago as Thomas Eric Duncan, a 42-year-old Liberian native who arrived here on September 20. He died of the disease early on October 8. The facts surrounding Duncan’s case have changed almost as quickly as promises from the mouths of Texas politicians. But, then again, when the media hurries to publish a story, the truth almost always gets lost in the chaos.

Duncan had been accused of lying on a questionnaire he was given upon boarding a flight from Monrovia to Brussels on September 19; one that asks travelers if they’ve had recent contact with an Ebola patient or have recovered from the ailment. We learned almost as soon as news of Duncan’s dilemma became known that he had carried a pregnant 19-year-old woman to and from a taxi cab shortly before he departed Liberia. The woman died of Ebola not long after she’d been turned away from a local hospital because they were filled to capacity. Then, some of her other relatives got sick and died. By the time she passed away, Duncan was already in Dallas.

Now, news reports claim that neither Duncan nor any of the pregnant woman’s relatives were aware she had Ebola. Apparently, the latter didn’t realize it until after she died. Such is the case in Liberia and other developing nations of West Africa. The health care infrastructure is as pathetic as the road infrastructure. That’s why it doesn’t surprise me that the pregnant woman was turned away from a hospital.

“If he had known he had Ebola … he would not have put the love of his life in a situation like this,” family friend Saymendy Lloyd said of Duncan after he died.

But, officials at Texas Health Presbyterian Hospital of Dallas should have known better than anyone in a ramshackle hospital in Liberia. It’s bad enough that – when Duncan first arrived on September 25, complaining of fever and nausea – the hospital merely sent him home with a prescription for antibiotics. Now, we’ve learned he had a 103° temperature that night. I’m not a healthcare professional, but even I know someone with a 103° temperature needs to be hospitalized. Then, there’s the breakdown in information. The nurse who saw Duncan initially recorded his temperature in the hospital system. But somehow, that crucial bit of data got lost in the electronic shuffle. Hospital officials were quick to blame the software, which was designed and distributed by Epic, a Wisconsin-based firm that controls about 20% of the U.S. market in electronic hospital records. Another piece of lost information – Duncan revealed he’d recently traveled from Liberia.

Someone once told me that computers are only as smart as the people who operate them. No, I responded, they’re only as smart as the people who design them. Actually, it’s both. Presbyterian Dallas’ story keeps shifting, so hopefully they’ll settle on a final version before the book and TV-movie come out. Regardless, none of it leaves me with any sense of confidence in the U.S. health care system. The U.S. has spent more time and money building prisons and sports arenas than health care facilities. Our backward-thinking politicians have made sure oil companies got large tax breaks, while funding for education is always put up for a vote – and fails.

Yet, it’s gotten worse. A nurse who tended to Duncan while he was in isolation at Presbyterian has now tested positive for Ebola. The news just broke, so there aren’t too many details, except that she’s a 20-something native of Fort Worth. Supposedly, her apartment has already been cleaned out, although reports state her dog is still inside. Hopefully, the animal doesn’t suffer the same fate as the pet of a Spanish nurse last week. I mean, I’d rather sacrifice the entire Texas State Legislature instead.

And, the drama continues.

Okay, I’m being a bit dramatic. But, officials with the Centers for Disease Control and Prevention have confirmed, along with Texas Health Presbyterian Hospital of Dallas, that an unidentified man has tested positive for the Ebola virus. This is the first time that someone in the United States has been diagnosed with the deadly hemorrhagic fever. Since March of this year, Ebola has wreaked havoc across Western Africa; killing nearly 3,100 people and sickening thousands more. Before now, outbreaks had been limited to rural areas in Central Africa. This epidemic has been the deadliest and most widespread since medical aid workers accidentally discovered and identified it in September of 1976. With roughly a 90% fatality rate, Ebola quickly supplanted smallpox as the most lethal pathogen known to humanity. The current epidemic, however, has had a fatality rate of about 60%.

And, I just knew it would be a matter of time before it would reach a major metropolitan area outside of Africa’s largest cities. I’m actually surprised it hasn’t occurred sooner. I recently told a friend it was never if, but when it would hit. I even added that, with our luck, it would pop up right here in my home city of Dallas, Texas. Sometimes, I just think too damn much.

Confidentiality laws in the U.S. prevent the man’s identity from being released, but officials at first said he traveled directly from Liberia – the hardest hit of the countries in the Ebola outbreak – to Dallas on September 19 to visit relatives who live here. Now, we know that he traveled from Liberia to Brussels on the 19th, and, the next day, from Brussels to Washington, D.C., and then on to Dallas. He began getting sick with fever a few days later and sought medical treatment at Dallas Presbyterian on the 24th. Doctors there just thought he had a bad fever and sent him away with some antibiotics. The biggest health threats, as far as local officials are concerned, have been West Nile virus, HIV and bad driving. The man’s condition worsened, and he returned to the same hospital via ambulance on September 28 where he was immediately placed into isolation. But, here’s an interesting fact: a nurse who tended to him the first time asked the man if he’d been to West Africa, and he purportedly said yes. The nurse is believed to have recorded that information, but the doctors either didn’t catch that (no pun intended) or ignored it.

Now, the CDCP is trying to backtrack and find everyone who’s been in contact with the patient. Earlier today Texas Governor Rick Perry and Dallas Mayor Mike Rawlings took part in a press conference at the hospital where they and the facility’s officials emphasized that they have the matter under control; adding that everyone must remain calm. It’s important to note that Ebola is a blood-born pathogen and – while highly infectious – isn’t contagious. You have to come in contact with an infected individual’s bodily fluids to risk exposure.

I understand that. But, who’s to say hospital workers who first treated the man weren’t lax in cleaning up after him? Among the people he came in contact with are 5 children who attend four different schools in Dallas. Knowing the poor sanitary habits of children (and plenty of adults), it’s possible they could bleed, vomit and / or be careless about cuts and scrapes without realizing the severity of their actions. Anything is possible when dealing with people.

I’m not one to panic, but I am somewhat of a health freak. I’m always washing my hands. I take showers more than once a day. Even my dog is cleaner than most people. Technically, the U.S. has far more resources to combat any deadly epidemic, including media and community outreach avenues. But, I don’t have much confidence in the CDC’s ability to handle this Ebola situation. I certainly don’t have any confidence in the city of Dallas’s ability to do the same. Another troubling fact – a friend of the man contacted the CDCP to inform them about him. In other words, the CDCP didn’t learn of the individual’s possible Ebola infection from Dallas Presbyterian.

I only have to look back at the U.S. government’s response to AIDS, when it was identified in 1981. Because the first victims were gay men, drug users and prostitutes, the government didn’t take it seriously. They reacted with moral condemnations. And, any time people make medical decisions based on religious ideology, people die. If the government had taken AIDS seriously from the start, there might at least be a vaccine by now. Conversely, the U.S. government did respond quickly to swine flu and Legionnaires’ disease; both of which came to prominence in the fall of 1976. They even jumped into action during the 1982 Tylenol poisoning cases, despite that being an isolated incident.

In August, health officials in Liberia and Guinea quarantined entire neighborhoods in a futile effort to stem the Ebola outbreak. If other people in Dallas start getting sick with Ebola, I’d like to see authorities institute a lockdown in a city of roughly 4 million people, which is dissected by major highways and where most everyone has a vehicle. We’ll just have to wait and see what happens.

In the meantime, I’ll try to predict something more positive happening – like a mass die-off of politicians and rap singers.