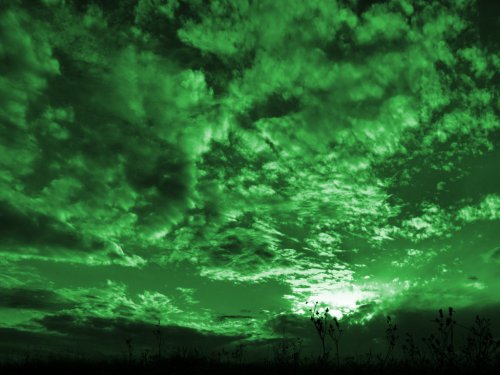 Survivalist Tip:  Yesterday I mentioned the importance of a tornado preparation kit in your arsenal of supplies.  But, it’s also important that you be able to recognize the actual signs of an approaching or pending tornado.  It’s obvious, if you’re outside on a jog, or in the yard planting azaleas, when some heavy winds suddenly come along and start sucking up stuff that you’re in the midst of a tornadic event and need to seek shelter immediately.  “The Wizard of Oz” is just a movie and doesn’t reflect the reality that you’ll get scooped up into a tornado and then safely dropped onto the ground.  It’s a more likely scenario that you’ll end up like that witch who got her ass flattened by the house.

Many people rely on their local TV and radio stations to tell them exactly when and where a tornado will hit.  That’s like relying upon the Audubon Society to tell you when a bird is going to crap on your head.  These people are what are commonly known as idiots.  They depend too much on technology and the government to make their lives comfortable and keep them safe.  They most likely will die in the apocalypse, which won’t necessarily be a bad thing.  The fewer stupid people around, the better the “New Universe” will be.  Besides, it’ll leave more chocolate for you and your loved ones.  More importantly, the probable shift in the Earth’s axes could spawn a plethora of tornadoes and hurricanes and knock out power utilities at the same time.

I’m sure you already know that clouds filled with precipitation are dark blue in color.  If you didn’t know that, you’ve spent too much time watching TV or playing video games.  Tornado-bearing clouds are often anvil-shaped, and the actual twister drops down from the narrow point of that anvil formation.  If you don’t know what an anvil is, then – again – there’s not much hope for you.

Many changes also take place in the atmosphere.  Before the tornado-bearing clouds form, the sky often acquires a lime green color.  Aside from a tie I wear on St. Patrick’s Day and freshly cut grass, the only lime green I like is mixed with Bacardi and Coke.  But, as the tornadic-type clouds come closer, the sky grows darker, almost black.  A black sky usually means it’s nighttime, but if it’s in the middle of the day, trouble is brewing above.

Here are a few other signs of an approaching tornado, or tornado-bearing cloud:

Remember, tornadoes form in North America more than anywhere else on Earth, and Indigenous Americans lived with them for thousands of years.  They learned to recognize the warning signs of an approaching storm and move into their stone and concrete homes.  No, they didn’t all live in teepees!  If you believe that, you’ve watched too many damn John Wayne movies.  More importantly, the native peoples respected the wind and rain and realized those elements were masters of the world.  Adopt the same philosophy and you’ll survive nicely into the next Baktun!