Mitt Romney probably won’t admit it, but his father – the late George Romney, a successful business executive and two-term Michigan governor – was a Mexican.  Not an ethnic Mexican – as someone of at least partial Mexican Indian extraction, such as myself – but a Mexican by birth.  George Romney was born in Galeana, Chihuahua, México in 1907.  His father, Gaskell Romney, and grandfather, Miles Park Romney, had moved to the region with their families 22 years earlier, after leaving their homes in Utah.  But, the mere thought of calling his own father a Mexican apparently makes Mitt Romney squirm.  This past January, when he appeared at Miami Dade College for an interview with Univision, the large Spanish-language network, host Jorge Ramos asked whether the “severely conservative” former Massachusetts governor felt he was Mexican-American.  It certainly put Romney in a tough spot.  If he said yes, he could alienate himself from the conservative and mostly non-Hispanic White voting base.  But, if he said no, he could lose one of the largest demographics in the United States.  Instead, like a true politician, he deflected the possibility by answering, “I would love to be able to convince people of that, particularly in a Florida primary.  But I think that might be disingenuous on my part.”  Where’s the birther crowd when you need them?

Mitt Romney likes to claim that his family fled Utah to avoid government-induced religious persecution; wandering like some lost tribe of Israel until they found a place they could call home: the heart of the Mexican desert.  There, they could finally live in peace and take care of their own; being completely self-sufficient, while intermingling with their Indian neighbors who were friendly and otherwise oblivious to the plight of the tortured Romneys.  Supposedly, if the Romneys hadn’t run for their lives, according to Mitt’s mythology, they would have been forced to sacrifice their dignity and practice a more mainstream Christian faith.  On one level, Romney insinuates his family’s flight to México is comparable to that of Jews fleeing Nazi Europe; lest they be annihilated because of their faith.  But, on another, he implies that his family’s ordeals mirror those of Native Americans; people whom European interlopers denounced as vermin who could only survive if they adopted Christianity.    What drama!  What poetry!  What a lie!

In reality, the Romneys moved to México to continue their polygamous lifestyles.  Many other Mormon families relocated to México in the late 1800’s, while others moved to Canada.  The United States had passed its first piece of legislation banning polygamy in 1862, when President Abraham Lincoln signed the Morrill Anti-Bigamy Act into law.  But, it didn’t do much to enforce it, since the nation was overwhelmed by the Civil War.  However, in the 1870’s, the U.S. began cracking down on polygamy.  Mormon men – not wanting to relinquish their harems – simply reacted by moving outside the U.S.  Both Gaskell Romney and Miles Park Romney had a gallery of wives.  Fortunately, though, George Romney only had one.  In 1911, Miles Park Romney returned to Utah with his family, as México descended into political and social chaos.  That time they really were running for their lives.  But, it’s an insult to real victims of religious and ethnic genocide for Mitt Romney to intimate that his ancestors suffered similar indignities.

George Romney met his future wife, Lenore LaFount, in high school.  Lenore had aspired to be an actress; she even had a contract offered to her by Metro-Goldwyn-Mayer.  But, as women were apt to do in those days – regardless of religion – she relinquished that ambition to marry George in 1931.  By then, George had gone to work for Alcoa, an aluminum manufacturing company, and eventually rose to executive status.  His job took the Romneys to Michigan where George switched over to American Motors, becoming its first CEO.  In 1962, he ran successfully for Michigan governor, earning a second 2-year term in 1964 and then, a 4-year term in 1966.  Two years later, he launched an unsuccessful bid for the Republican presidential nomination; losing to Richard Nixon in the primaries.  His support for civil rights and opposition to the Vietnam War surely cost him votes from the party faithful.  Still, Nixon appointed Romney as Secretary of Housing and Urban Development.  After leaving that post in 1973, Romney began a life of public service.  He died in 1995.  Lenore Romney passed away 4 years later.

But, since George Romney was born in México, would he have qualified to run for president?  The U.S. Constitution requires that the president be a natural born citizen.  The 14th Amendment defines citizenship somewhat specifically:  “All persons born or naturalized in the United States, and subject to the jurisdiction thereof, are citizens of the United States and of the State wherein they reside.”  Yet, Title 8 of the U.S. Code clarifies citizenship even further:

* There is an exception in the law – the person must be “subject to the jurisdiction” of the United States.  This would exempt the child of a diplomat, for example, from this provision.

And, so is Barack Obama, since his mother was born here.  The birther crowd, however, still hasn’t figured that out, or – more accurately – won’t accept it.  Sometimes, the truth just hurts too much.  But, where are they to demand Mitt Romney’s long-form birth certificate?  How do we know he was really born in Michigan?  Don’t those conservative extremists who comprise the birther clan hate México as much as they do Kenya?

Oh, yes, of course.  Kenya – Africa – Negro.  That’s where the difference lies.  George Romney was a full-blooded Caucasian.  How silly of me to forget the Republican definition of an American.  Either way, it’s interesting to note that, should Mitt Romney clinch the GOP nomination at the party’s convention in Tampa, I believe this will be the first time in U.S. history that the two primary candidates for the presidency both had fathers born in other countries.

Surprisingly – or perhaps not – many Romneys still reside in México; Anglo-American ranchers, farmers and business people who speak English and Spanish and consider Colonia Juarez home.  It’s a slice of Americana in a land first occupied by the Tarahumara thousands of years ago.  Some support their American cousin’s presidential ambitions, while others don’t; still others seem to have no opinion on the matter. 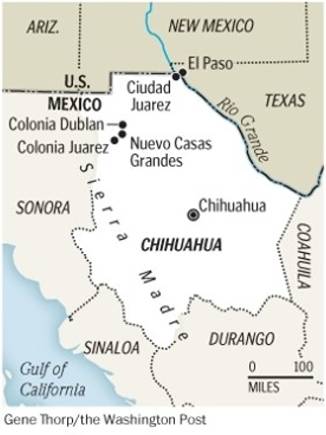 I have to admit I would relish the thought of a leftist version of the birthers demanding to see Mitt Romney’s birth certificate.  The issue of his Mexican relatives has come up only sparsely in the popular media.  But, while extremist liberals have some measure of lunacy in their ranks – denouncing the U.S. military as murderers, while supporting any defensive action taken by Israel, for example – I don’t think even they feel this would play well.

I don’t know what’s become of the birther gang in recent months.  Either the media stopped giving them the attention they never really deserved, or the group finally discovered real issues to confront like – you know – the economy.  I suppose they slinked away quietly once President Obama produced his long form birth certificate last year.  Their self-anointed leader, Russian-born California attorney / dentist Orly Taitz, however, still rears her peroxide-coated head, squawking here and there.  It’s an extreme insult that Taitz – a foreigner – has the audacity to say Barack Obama isn’t qualified to be the President of the United States because he allegedly was born in another country.  I’d like to see that chick’s immigration papers.

México’s citizenship requirements mirror those of the United States rather closely, so Mitt Romney and his siblings therefore, would qualify as Mexican citizens.  My father and I technically would fall into the same category since our respective mothers were born in México.  But, while my paternal grandmother made a concerted effort to attain U.S. citizenship in the 1940’s, my mother was already an American citizen at birth because her father was born – in Michigan.  This citizenship stuff can be as fun as it is complicated.

A few weeks ago, on his CNN show “AC360,” host Anderson Cooper spoke with Montana Governor Brian Schweitzer about a statement Schweitzer had made claiming Mitt Romney’s Mormon faith would be an “electoral liability” with female and Hispanic voters.

“I was saying that Mitt Romney currently has a problem with Latino voters,” Schweitzer said later in defense of his remarks.  “And it is ironic that his father had come from México.  You could think he could embrace his Latino roots.  I wasn’t talking about anybody’s religion.  In fact, in my comments I simply said that Mitt Romney is not a polygamist, doesn’t support polygamy and neither does the Mormon Church.”  Schweitzer said that he was trying to explain Romney’s problem connecting with Latino voters and women when he told The Daily Beast that Romney’s “family came from a polygamy commune in México.”

I guess Mitt Romney will have trouble living down that polygamy thing, which – unlike the birther gang charges against Obama – is actually based in fact.  But even now, I can see rumors in the press: Mitt Romney is keeping a cluster of other wives locked up in the White House with Ann Romney, as the figure head First Lady and “Chief Sister Wife.”  Secret Service agents running themselves ragged trying to keep up with so many women who aren’t prostitutes and so many kids who can’t storm through the Rose Garden.  A clandestine tunnel from Colonia Juarez to the White House wine cellar.  So many possibilities with so many untruths!  A Mexican telenovela couldn’t do it any better.

One response to “Mexican Romneys and Birther Hypocrisies”