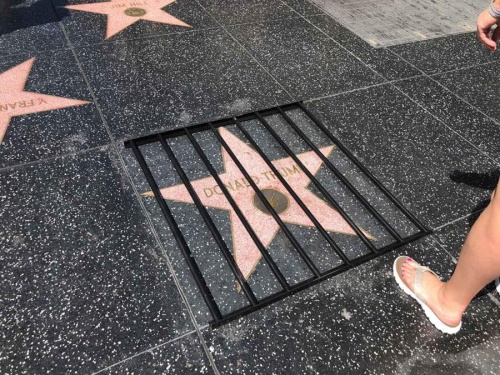 Donald Trump’s star on Hollywood’s legendary “Walk of Fame” has been vandalized too many times to count in the nearly two years since the cantankerous business tycoon was selected by the former Soviet Union to be our president.  The City of Hollywood – trying to perform its civic duty – has been willing to consider any reasonable idea of how to protect “The Donald’s” star.

A street artist known as “Plastic Jesus” has devised an ingenious idea: put the star behind bars.  Literally!

“There have been calls to jail Trump since the day he was elected, and today he was certainly put behind bars – or at least his now infamous star on the Hollywood Walk of Fame was caged,” PJ wrote in a recent email to Artnet News.

The London-born Los Angeles resident has become known for ambushing the public – and specifically, public figures – with graffiti-style street art combining humor and irony to express his criticism of current affairs.  In other words, he’s a true artist who tackles weighty subjects in order to piss off people who believe everything is just fine with the world.  In this case, the pissed off would be Trump supporters, as well as those who merely shrug at the sight of Trump’s star on the “Walk of Fame”.  It’s obvious (to those of us not been enamored with celebrity) that Trump’s placement in the White House is the most blatant act of fraud since Bill Cosby was labeled “America’s Dad”.

“Artists are able to connect and convey opinion in a universal way,” PJ notes.  “So I think it’s important for artists to speak out.  I think art encourages dialogue and debate like no other media.”

Just another typical day on the “Walk of Fame” in Hollywood, California. 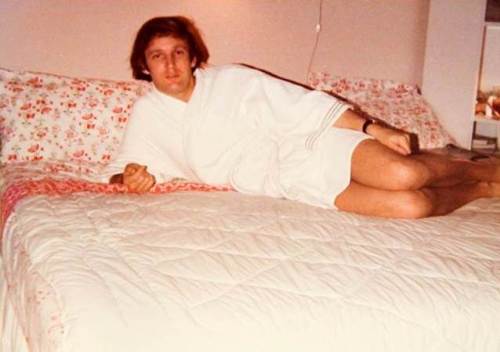 This past Friday, May 17, marked the 40th anniversary of the start of the Watergate hearings.  The Watergate scandal was a cataclysmic event in American politics; an imbroglio that brought down a sitting president and exposed the seedy underside of government.  It also made the American public realize their worst fears about elected officials were true.

Watergate actually refers to the Watergate Hotel in Washington, D.C., a luxurious complex overlooking the Potomac River.  Here in the pre-dawn hours of June 17, 1972, Frank Wills, a night security guard happened to stumble upon a group of men breaking into the Democratic National Party’s headquarters.  Ronald Zigler, then President Richard Nixon’s press secretary, denounced it as a “third rate burglary.”  It was enough to stave off any connection to Nixon who coasted to a landslide victory over South Dakota Senator George McGovern that November.  Nixon wasn’t that popular.  His constant delays in failing to end the Vietnam War looked to be a portent to his reelection, especially considering that 1972 was the first year 18 – 20 year olds could vote.  But, McGovern – despite his staunch anti-war views – wasn’t that effective or ambitious.  He only took one state: Massachusetts.  He tried to make Watergate an issue, but no information had surfaced yet tying Nixon to the burglary.  After the scandal broke, Bay State residents started driving around with bumper stickers proclaiming, “Don’t blame me.  I’m from Massachusetts.”

Jim Lehrer, who turns 79 today, was an early player in the media obsession over the Watergate Hearings.  He and fellow journalist Robert MacNeil commenced a then-innovative programming venture by covering the hearings live during the day and then discussing them in the evening.  In the days before cable TV and the Internet, Americans received most of their news from TV and print sources.  Critics condemned the move; insisting that PBS should focus more on its original intent: cultural and educational subjects.  But, the public was hooked.  Besides, the hearings quickly proved educational, in that people learned the minutia of daily government; plus, it was definitely a cultural milestone in American history.

I was only 9 when those hearings started.  My parents would rush home after work that summer to eat dinner and drop down on the couch to watch PBS.  I was more obsessed with my new German shepherd puppy.  But, I have vague recollections of those hearings and I quickly realized how significant the entire mess was.

Watergate was a critical juncture in American history; a cumbersome and frightening crossroad on the political and legal front.  It bridged the nation’s faux gold-plated past of high-minded constitutionalists fighting for democracy and liberty with the brutal reality of government corruption and deceit.  The country had almost self-destructed under the commotion of the 1960s: the assassinations of John F. Kennedy, Martin Luther King, Jr., and Robert Kennedy; the battles of the 1968 Democratic National Convention in Chicago; and the decade’s various civil rights movements.  Its brightest point – the only event that truly united us – seemed to be the 1969 moon landing.

Then, came Watergate, and everything in America changed.  Political figures never had much of an angelic reputation, here in the U.S. or anywhere.  But, not many in the American populace ever suspected their own president would stoop to overseeing a burglary.  Nixon apparently was so determined to win reelection he would break the law to find anything nefarious about his opponent.  Nixon’s tapes, recorded in what he thought was the sanctity and privacy of the Oval Office, sealed his fate.  Americans were shocked to learn how foul-mouthed and hateful he was.  Reading the excerpts in the local newspaper – with the word ‘expletive’ carefully juxtapositioned amidst the rest of the text – my parents couldn’t believe it.

By the summer of 1974 – as more details of the Watergate affair became clear, due in part to the dogged efforts of “The Washington Post’s” Carl Bernstein and Bob Woodward – the hearings metamorphosed into impeachment proceedings.  For only the second time in our nation’s history, a sitting American president faced the possibility of forced removal from office.  In August of that year, with the jaws of the scandal enveloping him, Nixon became the first president in American history to resign.  His Vice-President, Gerald R. Ford, ascended to the Oval Office.  Ford was almost a product of chance.  Spiro Agnew had been Nixon’s vice-president.  But, as the Watergate mess unfolded, Agnew faced his own quandary; he was indicted for tax fraud while governor of Maryland.  Under threat of impeachment, Agnew resigned in October 1973; only the second time that has happened in U.S. history.  When Ford assumed the presidency, he appointed Nelson Rockefeller as his vice-president.  Another dubious first: Americans found themselves with both a president and vice-president for whom they did not vote.

Ford exacerbated the problem by pardoning Nixon a month after taking office, and – along with the burgeoning energy crises, the Vietnam disaster and Jimmy Carter’s own disastrous presidency – the entire 1970s seemed like an unmitigated failure.  The only high point was the 1976 Bicentennial celebration.

That was the death knell for American politics as the nation knew it.  Whatever shred of dignity remained in the concept of public service splattered against the fan of volatility.  Nixon’s tactics established an unsettling trend: political candidates now focus more on what’s wrong with their opponent than on their own achievements.  It reached an apex during the 2000 presidential elections when George W. Bush’s inner circle used every filthy machination they could pull out of their rectal sewers to assail the other side.  It was the only way they could get an otherwise inept and unenviable candidate into the presidency.  They had done it six years earlier, when Bush first ran for governor of Texas.  His cronies began planting rumors that incumbent Governor Ann Richards had – gasp! – homosexuals serving openly in her administration.  That was enough to send the God-fearing rednecks to the voting booth – as if that had anything to do with governing.  But, people fell for it.

And, that’s just it.  Some people keep buying into the validity of such nonsense.  They believe, for example, that the Bill Clinton sex scandal really was a threat to national security, or that Barack Obama was actually born in Kenya.  I watch every presidential debate, along with other political discourses, and wonder, ‘What do you plan to do for me?’  Texas’ newest senator, Ted Cruz, gave an impassioned defense on why Chuck Hagel shouldn’t be Secretary of Defense, but has said virtually nothing about working with the president on the economy.  If anything, Cruz seems determined not to work with President Obama on anything!

Thus, is the spawn of Watergate.  Politics has become filthy, putrid and unmerciful.  Countless numbers of qualified individuals – well-educated, well-intentioned, articulate and compassionate – won’t sacrifice their souls and the souls of their families to the evil deity known as the American political machine.  After all, who wants to jump into that mess?