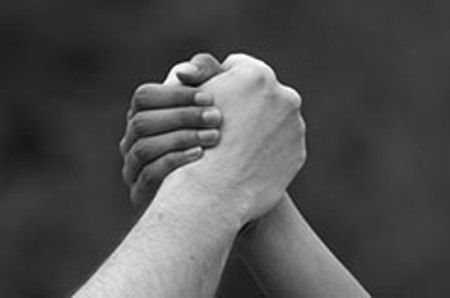 The story is disturbingly familiar: a White male with anger and / or mental health issues storms into a crowded venue with a bevy of firearms intent on doing unmitigated damage.  It occurred twice last year: in Aurora, Colorado and Newtown, Connecticut.  In this uniquely American phenomenon – a relentless nightmare – another such drama unfolded at a Georgia elementary school on Tuesday, the 20th.  Michael Brandon Hill, a 20-year-old, entered the school with a cache of weapons – and was stopped with an ‘I love you’ from an unimposing office clerk.

As school administrators and teachers frantically ushered the young students out of the building and police descended upon the area, Antoinette Tuff dialed 911 and began talking calmly to the troubled young man.  Her reassuring voice has been playing out on the national media these past couple of days; leaving people amazed and thankful that she managed to diffuse a hostile situation with mere words.  This is not the end people have grown accustomed to seeing.  All of the other hallmarks were present: people running for their lives; scores of police officials in riot gear; and media hawks jockeying for the best camera position.  Antoinette Tuff provided a surprising, yet pleasantly different conclusion.  No one expected that.  Even veteran hostage negotiators are expressing awe.

I have to admit I was surprised as well.  But, only for a moment.  As a life-long pacifist who suffers bouts of anxiety from not trying to hurt people who piss me off, I know that words can soothe the angst of almost any situation.  It’s a sign of intellectual prowess and emotional maturity when people make an attempt to be quiet and interact on a verbal level.  Dialogue solves more problems than a hail of bullets.

After last year’s massacre in Newtown, the ubiquitous National Rifle Association was compelled to speak publicly about the issue of guns and America’s brutal gun culture.  “The only thing that stops a bad guy with a gun,” Wayne LaPierre, the group’s executive vice president, proclaimed, “is a good guy with a gun.”

Listening to Antoinette Tuff tell Michael Hill that she identified with his emotional distress and insist that he’s worth something, I feel almost vindicated.  It’s better to talk than to fight.  It’s better to discuss matters and find common ground than to inflict bodily harm and relish in the bloody aftermath.  In the end, over 800 children went home and returned to school the next day.  Police took Michael Hill into custody and spirited him away for psychological evaluation.  Now, for the first time that I can recall, a would-be mass murderer was stopped.  Hopefully, doctors can learn what happened inside Hill’s mind; what traumatized him so badly that he went to that school with so many weapons.  And, we won’t have to rely upon Facebook rants or indecipherable drawings to ferret out the truth and try to make sense of the insensible.

Here’s something that’s not surprising – Antoinette Tuff doesn’t consider herself a heroic figure.  She merely views herself as an unimposing school district employee who became enmeshed in a frightening situation and utilized both her spiritual faith and her unconditional love to thwart a tragedy.  She didn’t need a gun and she didn’t need a bomb; she just needed some gentle words. 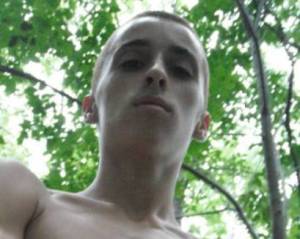 T.J. Lane in a photo from his Facebook page

When I was a sophomore in high school, a fellow student brought a switchblade to school one day and pulled it on an older kid.  The second guy had bullied the younger one since the start of the school year; in fact, he’d bullied a lot of other boys.  But, on this particular day, when he found himself staring at a switchblade in the hand of one of his targets – a tall, lanky kid who wore thick horn-rimmed glasses – he suddenly felt victimized.  The coward beneath the brawn and foul-mouthed exterior abruptly emerged and he reported the incident.  Guess who got in trouble?  Yes, the tall, lanky guy with glasses.  To resolve the matter, a P.E. instructor (who looked like a pint-sized bulldog) paired up the two boys in a boxing match.  “We don’t settle things with knives around here,” he supposedly told the knife-wielder.  The boxing match was an attempt to teach the lanky kid a lesson.  I wondered then – and now – what lesson the other guy had learned.  I imagine he learned it was perfectly okay to terrorize whoever he wanted.

That was over 30 years ago, and I still feel the same way about the incident.  I feel that same way whenever I recall the number of times I was bullied in school.  As a small, shy kid, I was an easy mark, too.  And, in my worst fantasies, I wished I could bring a knife, or even a gun, to school and put a stop to it.  But, I never did.  I had no access to a firearm during my school years and I just never developed the nerve to bring a knife.  But, I wondered…

On February 28, 17-year-old Thomas “T.J.” Lane brought a gun to his suburban Cleveland high school and shot 6 fellow students.  One boy died instantly; 2 others died the next day.  Lane was arrested near the school just hours after the shootings and has already been arraigned.  Because he’s 17 and killed 3 people, he’ll most likely be tried as an adult and sentenced to a maximum security prison.  But, as I watch the media coverage, two terms stick out in my mind: shy and bullied.  T.J. was shy, according to other students at the high school, and had been subjected to harassment.  That was me more than three decades ago – and it was the tall, lanky kid with thick horn-rimmed glasses.  I’m saddened by the deaths of those three young men in Ohio.  But, I empathize with T.J.

In the past 30 years, a lot has changed in the school system – for better or worst.  Schools now have metal detectors and hire their own security personnel.  Who could have imagined our children being treated like terror suspects?  But, since the 1999 Columbine massacre, that’s exactly what’s happened.  Kids with vengeance on their minds aren’t bringing switchblades to school anymore; they’re coming with AK47’s and Molotov cocktails.  But, one significant factor hasn’t changed: kids are still being bullied.  And, school officials are still reacting to the tragedy, instead of acting to stop it in the first place.

It reminds me of the nation’s response to the 09/11 terrorist attacks; only afterwards did someone think to arm airline pilots, fortify cockpit doors and pay closer attention to foreigners who overstayed their Visas.  To be fair, some schools have taken a more proactive approach with emphasis on both counseling and student outreach and not just discipline.  More importantly, the practice of bullying isn’t taken so lightly anymore.  In my youth, adults had a ‘kids-will-be-kids’ attitude; we were told to tough it out.  Now, school officials recognize that bullying can lead to poor academic performance for victims and a greater chance of criminal behavior later in life for the victimizers.

The numbers bear out their concerns.  A 2011 National Education Association (NEA) study found that:

But, there still appears to be an alarming disconnect with school officials.  The same study found that:

Even the Obama Administration has become involved; hosting a conference last year on how to recognize and stop bullying.  Thus, when a kid reports being bullied, many adults don’t just sit back and hope everything will work out for the better.  But, as with 09/11, it seems to be almost purely reactionary; we’ve seen an increase in both school shootings and threats of shootings or bombings made by angry students.  Indeed, if a kid sends a text message to a fellow student saying he or she wants to blow up the school, that second kid runs to the principal’s office.  But, how do we intervene before that text message is sent?  That is, what can be done to stop a youth from feeling so desperate?  T.J. Lane had a Facebook page where he spelled out his dark sentiments.  Did someone think to take that seriously prior to February 28?

I believe the crux of the problem lies with the family structure, which has been battered in recent decades.  Divorce rates hover near 50% in the  U.S., with more kids being raised in single-parent homes than ever before in the nation’s history.  The recent recession has placed extreme psychological and emotional burdens on families.  Poverty has always done that to people, but this time it’s more disastrous.  I come from a middle class background and had a stable home life.  I feel that’s what saved me from acting upon any revenge fantasies.  My parents were involved in my life; they didn’t come home after work and drop down in front of a computer, or head off to a racquetball court.  We had dinner together and talked about things.  When I finally told them that a neighborhood boy was leading a group of other kids from my school in bullying me, my father confronted that other boy’s father – and the bullying stopped.  But, T.J. Lane didn’t have that benefit; his father was a convicted criminal.  While it’s an extreme case of parental neglect, there are thousands of other kids who live in otherwise stable homes, surrounded by a wholesome environment – and they’re still bullying targets.  Who’s watching out for them?  Why are some parents too busy these days to take more than a casual interest in their children’s lives?  Why do they expect the schools to handle these matters?

I don’t have all the answers.  I’m not a parent and I don’t know what it takes to run a school.  But, I know how it feels to be bullied.  I know what it’s like to want revenge so badly I could taste the blood of my tormentors.  I’m glad, though, that schools aren’t dismissing such behavior as mere child’s play; the price of growing up and struggling through an awkward adolescence.  In the meantime, everyone at T.J. Lane’s school and everyone in that community will never look at the world the same way again.  But, how many more school shootings will we witness?  Who’s going to give a voice to those troubled youths?  Why can’t we stop kids from being bullied to death?

Visit the government’s “Stop Bullying” site to learn how we all can help.