“Climate change shouldn’t be fodder for commentators who represent the interests of the fossil fuel industry by muddying the science.  As a human and a scientist, this focus on controversy is frustrating.  A thermometer is not liberal or conservative.”

As the horror of the wildfires continues to unfold in Australia, Prime Minister Scott Morrison felt the heat of anger from residents forced to evacuate, when he visited them at an encampment in the town of Cobargo, New South Wales on January 2.  With the death toll for both humans and animals rising, it didn’t seem appropriate for Morrison to take a vacation as the fires grew.  As people are wont to do even in the worst of situations – especially to political figures – Australian artist Scott Marsh has done what artists do best: made a stinging rebuke.  His “Merry Crisis” tee shirts have already proven popular.  Marsh isn’t just expressing bad sentiments towards Morrison.  Proceeds from sales of the shirts will be donated to helping victims of the fires.  Someone, of course, must always keep our elected officials in check.

The threat of climate change – and the forecasted rising sea levels – prompts a variety of responses from people: anger, frustration, denial and new ideas.  The latter is often a matter of subjective interpretation.  Many think of converting human waste to biofuel.  Others, like Wojciech Morsztyn, design new structures to accommodate the changes.

Morsztyn, a creator with Yanko Design, recently unveiled plans for massive house boats called ‘Ocean Communities’ where people could escape, as sea levels increase.  Some coastal and island communities are watching as seawaters encroach more and more upon them.  In the U.S., residents of some coastal small towns are being relocated further inland.  Dykes and levees just aren’t functioning properly in the face of such slow-moving catastrophes.

It’s inevitable, though, that some people will flee to the water itself and relocate their lives to an aquatic existence entombed in a boat.  Ocean Community doesn’t offer a monetary figure for such an abode, but I’m certain those of us in, say, the lower 95% economic range won’t be able to afford one.  That’s inevitable, too.  Most of the aforementioned communities being relocated are of the indigenous persuasion, such as the Alaskan Inuit.

More importantly, is this the real solution to dealing with climate change?  Aren’t house boats an admission of defeat?  Regardless, this video may be appealing, but I have to wonder if it’s the right answer to the pending chaos.

“You don’t believe in climate change.  You are excused from this conversation.”

Yes, indeed, such matters as climate change and disaster response are intended only for adults – or at least adult-minded individuals – to discuss.

“According to NASA, one hurricane is the equivalent of 10,000 nuclear weapons.  One volcano is 10,000 atomic weapons.  So every year, we have got like two million atomic and nuclear weapons going off and the planet still seems to be in pretty good shape, so what is it we think we are going to do to damage the planet?”

– David Barton, evangelical Christian political activist, founder of WallBuilders, and pseudo-historian, dismissing concerns about what climate change could mean for the future of the planet.

I’m not a biblical scholar, but I recall this passage from Luke 23:34 –

“When they came to the place called The Skull, they crucified Him there, along with the criminals, one on His right and the other on His left.  Then Jesus said, ‘Father, forgive them, for they do not know what they are doing.’  And they divided up His garments by casting lots.  The people stood watching, and the rulers sneered at Him, saying, ‘He saved others; let Him save Himself, if He is the Christ of God, the Chosen One.’”

The Chief’s translation: never mind him; he’s a dumbass who doesn’t know what the fuck he’s talking about.

– Faux President Donald Trump, at the G7 Summit, regarding the U.S. response to climate change and why he wouldn’t the wealth generated by energy companies over environmental concerns. 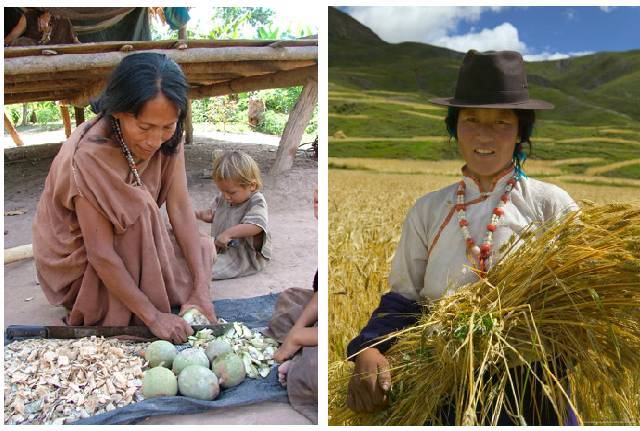 Humans have always been subject to changes in their environment.  They’ve struggled to adapt to a variety of extremes.  The “Little Ice Age” in the 16th and 17th centuries killed livestock and crops, particularly in Europe.  Prolonged droughts in what is now the Southwestern United States, beginning in the 11th century A.D., forced many of the region’s inhabitants to abandon their city-states.  Only in recent years, however, have scientists begun to realize that humans also can have a negative impact on their environment.  Unsanitary living conditions in medieval Europe allowed the spread of the bubonic plague in the 14th century.  Overpopulation on tiny Easter Island led to almost complete deforestation.

Yet, there are examples of people whose cultural beliefs imbue them with a sense of personal responsibility towards their surroundings.  The Yanesha of the upper Peruvian Amazon and the Tibetans of the Himalayas are among them.  Over the last 40 years, Dr. Jan Salick, senior curator and ethnobotanist with the William L. Brown Center of the Missouri Botanical Garden has worked with both cultures.  She explains how their traditional knowledge and practices hold the key to conserving and managing biodiversity in a paper entitled, “Biodiversity in Agriculture: Domestication, Evolution, and Sustainability,” published by Cambridge University Press.

The Yanesha and Tibetans are two different groups living in radically dissimilar environments, but both cultures utilize and value plant biodiversity for their food, shelters, clothing and medicines.

“Both cultures use traditional knowledge to create, manage and conserve this biodiversity, and both are learning to adapt to and mitigate the effects of climate change,” said Salick.  “They have much to teach and to offer the world if we can successfully learn to integrate science and traditional knowledge.”

The Yanesha live a few hundred meters above sea level at the headwaters of the Amazon basin in central Peru.  They possess traditional knowledge about one of the most diverse tropical rainforests in the world.  Salick studied the cocona, a nutritionally important fruit native to the upper Amazon.  She found the Yanesha have increased the genetic diversity of the species over time through preferential selection of oddly sized and shaped fruits.

In contrast, the Tibetans dwell on the slopes of sacred Mt. Khawa Karpo and the upper Mekong River.  Tibetan traditional knowledge, like that of the Yanesha of the Amazon, has long emphasized adaptation and biodiversity, and is now challenged by climate change.

Tibetans depend on biodiversity and entire landscapes for their livelihoods.  Salick’s team measured the biodiversity on Mt. Khawa Karpo by sampling vegetation along vertical transects up the mountain.  They found tremendously high variation of plant species at different elevations.  These diverse alpine mountain ranges are also among those most likely to suffer critical species losses as the result of global climate change.  Contemporary photos of the Himalayas show exceptional glacial retreat and tree line and shrub advance, more so than other alpine areas around the globe.  Some of the most threatened, slow-growing plants such as the endemic snow lotus, used to treat blood pressure and hemorrhaging, could become extinct while more common “weedy” species take over and lessen the region’s biodiversity.  But, Tibetans are adapting.  They now grow grapes, which previously could never survive the severity of Himalayan winters, to make wine – ice wine is their specialty.  They are mitigating climate change by incorporating large quantities of organic matter into soil, conserving forests that are expanding (afforestation) and preserving sacred areas with high biodiversity and old-growth forests.

As the U.S. and other developed nations debate the merits of climate change and other controversial subjects, I feel it’s important we pay attention to so-called primitive culture like the Yanesha and the Tibetans.  They’ve apparently been doing something right.  Otherwise, they wouldn’t have been able to survive all these centuries.