“Religious freedom is a fundamental American value, but it’s not a license to discriminate. Elected officials shouldn’t be allowed to use their religious beliefs as an excuse to pick and choose which taxpayers they would serve.  If a government official can’t treat everyone equally under the law, then it’s time for them to find another line of work.”

– Dan Quinn, spokesman for the Texas Freedom Network, on the public warning Texas’ State Commission on Judicial Conduct issued to Justice of the Peace Dianne Hensley for violating ethical standards by failing to treat LGBTQ people fairly in her courtroom.

Sadly, today marks the 56th anniversary of Kennedy’s assassination here in my beloved home town of Dallas, Texas.  I feel that, despite his short life and even shorter presidency, Kennedy helped to cultivate and enhance the concept of a true democratic society and successfully challenged Americans to work hard for those goals and to make their own lives better.  We desperately need such leadership and forward-thinking ambitions today.

“If the society today allows wrongs to go unchallenged, the impression is created that those wrongs have the approval of the majority.”

“I know I can speak for myself.  I forgive you.”

Hope with Truth and Justice

In the Valley of Hope, Truth was an elderly woman who traveled on her Horse of Justice; telling the villagers what they often heard from the outside world was wrong, inaccurate, immoral and even dangerous.  Whether it was lies about medical issues or dubious declarations made the Valley’s appointed leaders, Mother Truth always settled the villagers’ fears.  They had trusted her for as long as they knew and had no doubted she held their best interests close to her heart and soul.

Then, a new group of people ascended to the village leadership.  They were loud and angry and disdainful of their predecessors.  They mocked the people who had come before them with vulgar language and degenerative names.  At first the villagers merely viewed them as pure buffoons; clowns who loved the attention.  But, after a while, some of the valley residents began to listen to this new crop of leaders.  Then they started believing them.  And they began repeating the claims espoused by these new self-styled leaders.  More and more of the residents started to believe these people.  After all, the latter group was wealthy and educated – they must know of what they speak.  They could not be lying.  The words these individuals used, the images they painted of a world out of control – all of it frightened the valley residents.

One afternoon Mother Truth tore through the Valley atop Justice and frantically told the villagers that the crescendo of lecherous voices from of these new leaders spewed out falsities.  “They do not understand what they say!” she cried.  “They are merely greedy and arrogant!  They want nothing more than to secure their own futures and their own wealth!”

“What shall we do?” asked the people.

“Stop believing every single thing they say!” Mother Truth replied.  “Think and research for yourselves!”

Stunned, the crowd suddenly and unexpectedly metamorphosed into an angry mob.  They attacked the old sage unmercifully and hurtled her into a catacomb, before sending Justice into the fields to reap the crops.

Eventually, some of the villagers realized they had made a mistake.  “Mother Truth has never lied to us,” they moaned.  “Her very name reveals the nature of her soul.  We must free her.”

With the help of these renegades, Mother Truth escaped the catacombs and rescued her horse from an orchard.

Defiant, she rode back into the village, her head held high and her silver hair fluttering in the wind.

Troubled by their own behavior, the valley residents came to accept a painful reality – Truth may hurt, but hope always wins out, and justice plows forward.

Justice was recovering in a Dallas animal shelter before he died last month.

I reported last month about the case of a 4-month-old puppy that was doused in lighter fluid and set afire in South Dallas apartment complex.  The animal suffered severe burns over 70% of his body and died 4 days after the incident.  Police named him “Justice” and sought information about the perpetrator.  A woman who lived in the complex and witnessed the attack finally came forward to identify 18-year-old Darius Ewing as the perpetrator.  Ewing turned in himself shortly afterwards.  A judge set Ewing’s bond at $100,000, but at a hearing this morning in Dallas County, the amount was reduced to $50,000.  Ewing’s mother testified that her son is not a flight risk and complained that the bond was too high because he didn’t kill a person.  Despite his age, Ewing already has an extensive juvenile criminal record going back 4 years.  He’s been charged previously with assault and has gang ties.

His mother’s comment pisses me off.  Stupid bitch!  I don’t care that her precious baby didn’t kill a person.  Just because she doesn’t seem to view him far removed from Pampers doesn’t mean he’s not a danger to society as a whole.  I’ve noticed a lot of these punks have mothers who appear clueless.  If Ewing set a dog on fire, who’s to say he wouldn’t do the same to a human?  A child?  An elderly person?  Gang members have no soul and therefore, deserve no sympathy or compassion – no matter how badly their mothers cry.  I’ll keep everyone updated, as this case strikes a personal chord with this animal lover. 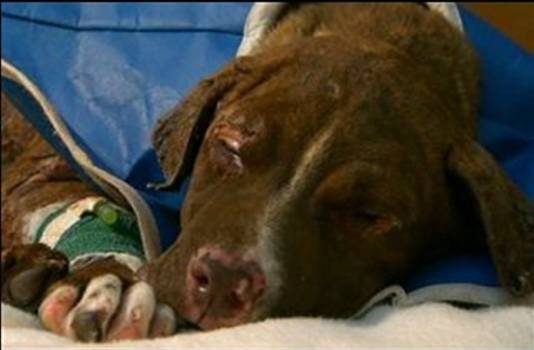 This story has been at the forefront of the news in the Dallas / Fort Worth area for the past several days.  Justice was a pit bull puppy who was hung from a wrought-iron fence in an apartment complex in the Pleasant Grove area of Dallas, doused with lighter fluid and set on fire last week.  The animal actually survived the initial blaze, but suffered such severe external and internal burns that he passed away the other day.  A reward for information leading to a suspect or suspects has reached $25,000.00; the highest amount for an animal cruelty case I’ve ever seen.  A woman came forward recently, however, and identified a culprit.  Dallas police now have a warrant out for the arrest of 18-year-old Darius Ewing.  Dallas Animal Services is asking that any other witnesses, or anyone with more information, call Crime Stoppers at 214-373-8477.  All calls will be confidential.

Personally, I’d have no problem seeing whoever burned Justice suffer the same fate, but civil liberties groups might get a tad bit upset.